Scottish Natural Heritage, the statutory conservation body in Scotland, has just launched a consultation on the General Licence in Scotland. This includes looking at the merits of adding the Raven to the General Licence 2, resulting in minimal scrutiny and no reporting. Currently Ravens can be killed by applying for a specific licence, and in recent years quite large numbers have been killed each year. I blogged about this last year, and the numbers are within the table below, showing that in the region of 3000 Ravens have been legally killed in Scotland in four years. Constructing the table below was only possible because licence holders are allowed to kill a set number of birds based on their specific circumstances, and have to inform SNH how many they have killed once the licence has expired.  Such information doesn’t have to be provided if a bird is added to the General Licence. 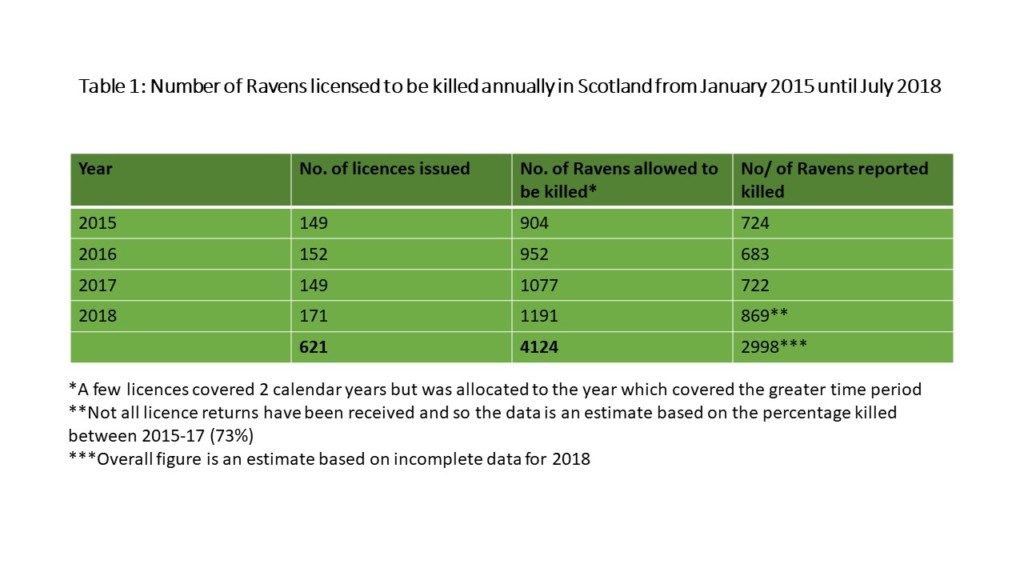 As pointed out by Raptor Persecution UK, this quite significant potential change to the General Licence, was not mentioned in the associated Press Release, despite SNH surely being aware that there is significant public interest in the killing of this species. Remember Strathbraan? Remember the 188,000 people who signed a petition against the Strathbraan cull? Remember the 1000+ people who donated more than £25k to support a legal challenge to against the Strathbraan cull? The science behind the Raven cull wasn’t particularly well received by SNH’s own Scientific Advisory Committee either.

In previous FOI exchanges with SNH about Raven licences they stated that they are “confident that our licensed activities will not affect raven conservation status.” It was also clear that they were basing that statement on some population modelling that they had contracted the British Trust for Ornithology to undertake. The findings of this research were published earlier this year. It is a rather detailed study that is full of complicated population modelling, but the main findings, which are summarised at the beginning of the report, are particularly relevant in the context of this blog. Remember, SNH are considering the merits of adding the Raven, currently a protected species, to the General Licence so it can be killed with minimum scrutiny and no reporting. Essentially, if that were to happen, we wouldn’t know how many Ravens would be killed each year.

I highlight some of the most relevant key findings and comment on these in brackets:

This piece of research was commissioned by SNH at the cost of at least £28,000. I would suggest that that is good value for money. It would of course be a total waste of money if the results were ignored and Ravens were allowed to be killed above the maximum level of 200 birds per 100km2. Surely the best way of ensuring these levels aren’t exceeded is to maintain the status quo and require land managers to apply for specific licences to kill Ravens.

You can view the SNH General Licence consultation here.