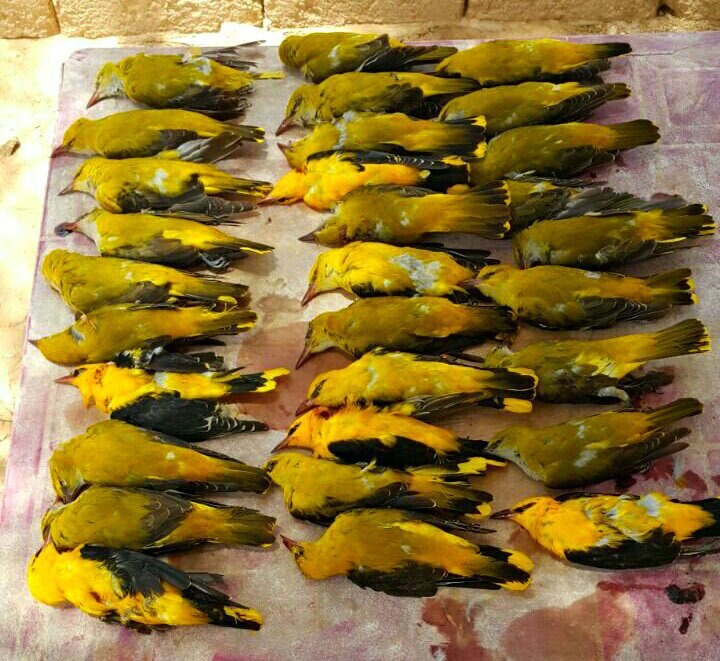 Illegal bird killing and the taking of birds is a conservation problem around the globe, whether it be trapping in the Mediterranean or the songbird trade in south-east Asia. I’ve been part of a team undertaking a review of the illegal killing of birds in the Arabian Peninsula, Iraq and Iran over the last few years and the results have just been released in the OSME journal Sandgrouse. The review has been undertaken jointly by BirdLife International and OSME with the help of many experts in the region, and gives an insight into the scale of the problem and the conservation challenge ahead of us. Today, along with Ibrahim Khader from the BirdLife Middle East office, I’ll be presenting the results at a workshop against the illegal trade in birds of prey at the Abu Dhabi Hunting and Equestrian Exhibition (ADIHEX2019).

The full research paper will be available online shortly, and in the meantime the results are summarised in the press release below:

Press Release embargoed until Aug 27– A study out today, for the first time, estimates the scale and extent of the illegal killing and taking of wild birds in the Arabian Peninsula, Iraq and Iran. Using a diverse range of data sources and incorporating expert knowledge, we estimate that at least 1.7–4.6 million birds of at least 413 species may be killed or taken illegally each year in this region, many of them on migration. Worryingly, this is likely to be an underestimate as data were unavailable for parts of the region. The highest illegal killing/ taking figures were mean estimates of 1.7 million birds per year in part of Saudi Arabia and 800,000 birds in part of Iran, despite in both cases data only being available only for part of the country. Estimates of illegal killing and taking in Iraq and Yemen were also relatively high with 329,000 and 273,000 birds on average estimated to be illegally killed or taken each year.

Illegal killing and taking poses a global threat to biodiversity and has attracted international attention. For example, in 2014 the Convention on the Conservation of Migratory Species of Wild Animals (CMS), to which most of the countries from this review are Parties, adopted a Resolution to prevent illegal killing, taking and trade of migratory birds in 2014 (UNEP/CMS 2014).

Worryingly, in this latest study, several species of global conservation concern were illegally killed or taken, including Marbled Teal Marmaronetta angustirostris, Common Pochard Aythya ferina and European Turtle-dove Streptopelia turtur (all classified by BirdLife International as Vulnerable on the global IUCN Red List). Of greater concern, Sociable Lapwing Vanellus gregarius (Critically Endangered) was also reported to be known or likely to be killed illegally each year in relatively high numbers relative to its small population size.  Illegal shooting and illegal trapping were the two most prevalent methods and birds were reported to be illegally killed or taken primarily for sport, but also for food, mainly as a delicacy. In several countries illegal killing and taking was widespread throughout the country, but for other countries particular worst locations were identified. These included the Caspian Sea coast in Iran and the mountainous Kurdistan region of Iraq with more than 100,000 birds a year estimated to be illegally killed/ taken in each location and waterbirds particularly affected. Both Iran and Iraq provide important staging and wintering areas for migratory birds, especially waterbirds, and high levels of take may be a factor driving population declines of waterbirds in the Central Asian flyway.

Combining the results of the current study with those for other countries of the Middle East from a previous Mediterranean focused review of the issue led by BirdLife in 2015 (Brochet et al. 2016) paints a concerning picture for the Middle East region as a whole. A mean of 17.5 million birds (8.0-27.1 million birds) is estimated to be killed annually across the combined region, of which 18% is in the (partially assessed) Arabian Peninsula, Iran and Iraq. In five of the 17 Middle East countries assessed, >1 million birds may be illegally killed on average each year. For the whole Middle East region (and neighbouring countries), the highest estimated numbers were in Egypt, Syria, Lebanon, Saudi Arabia and Iran.

Our study also highlighted the paucity of data on illegal killing and taking of birds, and more generally on bird population sizes in the region; thus the implementation of systematic monitoring of the numbers of birds illegally killed or taken there is a priority.

The most pressing need is for immediate action by relevant national authorities, enforcement bodies and other stakeholders to implement a ‘zero tolerance’ approach to illegal killing across the region, building on efforts already underway in some countries. Development of multi stakeholder national action plans to address illegal killing could be a useful approach to identify priorities and guide effective action. The key actions needed vary between countries but include improvements legislation, improved enforcement of and compliance with legislation, focused action at the worst locations, increasing surveillance and action at markets and in relation to online activities, more consistent application of adequate penalties for illegal killing, education and awareness raising among the general public and key groups such as hunters, and improved monitoring and research into socioeconomic drivers of illegal killing; leading to solutions tailored to the local context. As is clear from the example of illegal trapping and cross-border trade of falcons into the Arabian Peninsula, there is a need for increased collaboration between countries to adequately address illegal killing and taking.