A New Deal for Nature

A New Deal for Nature 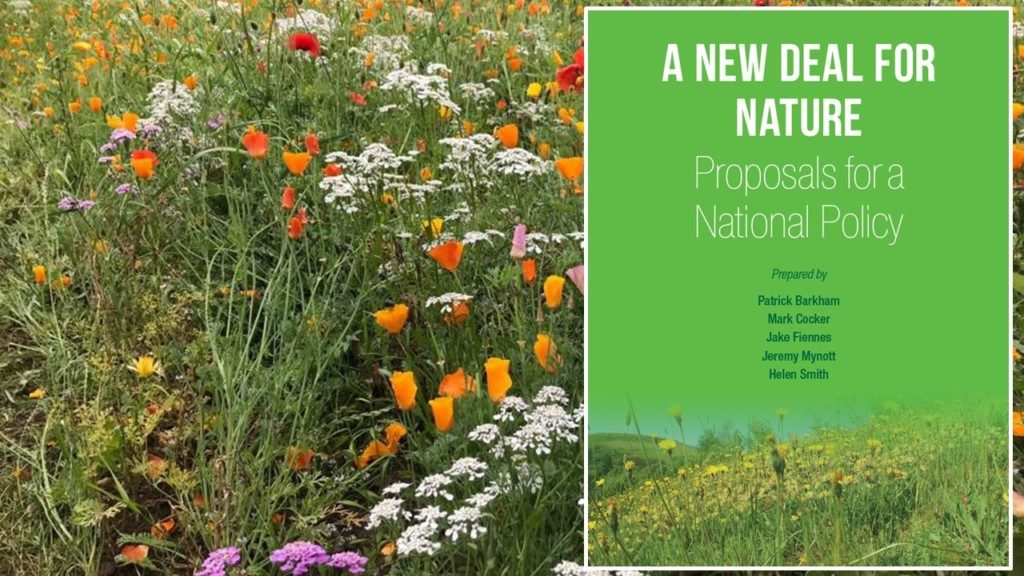 A New Deal for Nature was launched yesterday by Caroline Lucas which has a range of policies to protect and restore wildlife and habitats in the UK. From a quick glance, much of what is in the report is also in the Green Party manifesto. Caroline opened the proceedings, chaired by Ellie Chowns MEP, followed by short contributions from four of the five report authors – Patrick Barkham, Mark Cocker, Jeremy Mynott and Helen Smith. All the contributions were excellent but a final guest contribution from Bella Lack who read out a poem she’d composed – ‘If Earth Could Speak,’ – stole the show.

The report is good, very good. Upon arrival at the launch event attendees were given a copy of the report. A quick glance through it and much of it seemed very familiar. Back to the acknowledgements section – “some of the ideas behind our policy recommendations were inspired by A people’s manifesto for wildlife (Packham et al 2018).” Just a quick glance through my battered copy of A people’s manifesto for wildlife suggests that it is a little more than some! – this is not a criticism, I’d like to think that Chris and the various Ministers would be delighted that so many of the excellent ideas from that publication are being recognised as valuable contributions to solving the nature and environmental crisis. Interestingly, at least five of the contributing Ministers were actually present at the launch. A specific policy to ban lead shot (not ammunition. Although the Green Party manifesto specifically states ammunition) is in the report, so I’m content.

There was at least an hour of questions to the panel and subsequent discussion. I didn’t make any notes about specific questions and answers but two broad themes that emerged were how people are increasingly disconnected from nature and the lack of diversity in nature conservation. There is a role for us all to play here irrespective of what our new Government looks like next week. We can all help inspire families and friends about the wonders of nature.

There was a specific question from Ruth Tingay (co-director of Wild Justice & Minister of Wildlife Crime) on why there was no mention of banning driven grouse shooting in the report. The response was that there was a de facto ban as two specific policies on banning intensive moorland management in designated areas and outlawing medicated grit would effectively see an end to driven grouse shooting. In addition, the proposal to license all game shoots (which presumably should include grouse shoots) with each licensee having a quota, would also result in an end to driven grouse shooting. I don’t think Ruth was convinced and I can’t help thinking why the report couldn’t have just explicitly stated a recommendation for an outright ban. Back to the acknowledgements section – “The working party (ie co-authors) divided between them the responsibility for producing first drafts of the ten sections of this Report, but all drafts have been discussed by the whole group and the final versions represent our agreed and unanimous recommendations.” Sometimes to seek consensus you have to compromise, and may be that is what happened here?

There are a few additional things that I would have liked to have seen in A New Deal for Nature:

Overall, this is an excellent report, and huge thanks to Caroline Lucas, Patrick Barkham, Mark Cocker, Jake Fiennes, Jeremy Mynott and Helen Smith. As with the Peoples Manifesto for Wildlife, there are many excellent policy ideas, a significant number of which could be actioned by any Government (although they probably won’t be unless it’s Green!!). Dare one say the report is pretty much oven-ready? The need has never been greater, the ideas are there, the policies are clear, but what nature needs most from our politicians is some ACTION.

A link to the New Deal for Nature report can be found here.

A link to the Peoples Manifesto for Wildlife can be found here.