A joy of Jays

A joy of Jays 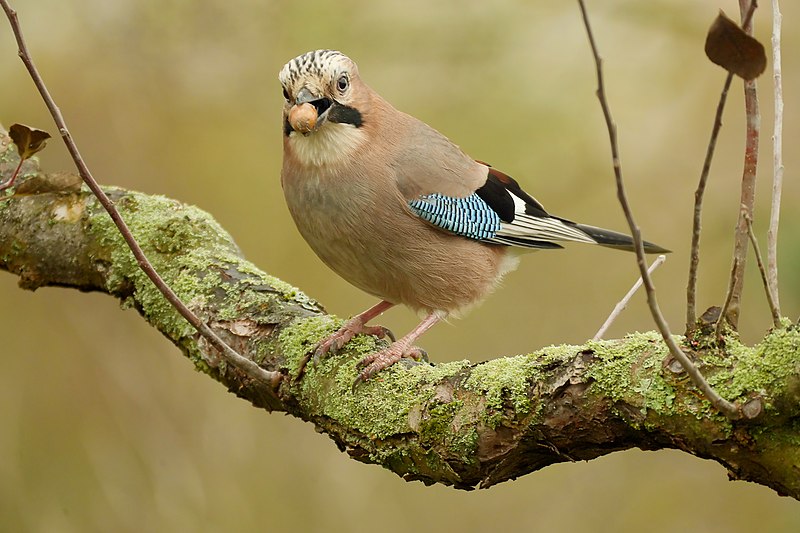 Whilst out birding over the last week I’ve been pondering several things that all come back to Jays – bear with me…..

I like Jays Garrulus glandarius – Garrulus meaning noisy or chattering and glandarius relates to acorns – an accurate scientific name indeed! I’ve had three above average visits to the Wanstead Park part of my local birding patch over the course of last weekend and today. Watching Jays has given me endless pleasure. They’re not rare on the patch, indeed they are one of the most common species – a quick look at my BirdTrack records shows that I’ve recorded them on 114 complete checklists out of 120 (95%). This time of year they are particularly noticeable as they are highly mobile collecting acorns. Last weekend I watched three individuals for about 40 minutes collecting acorns and burying them in a horse paddock. Early this morning I watched one bird collect several acorns and cache them underneath a patch of bark coming away from the trunk of an oak tree. Come late morning I was watching a group of birds (at least six) in the hedgerow adjacent to the horse paddock. They were being rather garrulous! It was as if they were scolding each other for not remembering where they stashed last week’s acorns – I’m sure this wasn’t the case, but it made me smile.

I’m delighted that Wild Justice have been successful in their campaign and legal challenge to bring about changes to the general licence in England and Wales. There is still some way to go before the general licence moves to a fully evidenced based system rather than the casual killing approach that it has been up until now. I like the phrase casual killing – coined by Wild Justice, I think. When it comes to Jays, this is exactly what it is. As Mark Avery points out in several blogs this week (here, here and here), there is no ecological justification for the killing of Jays. It is estimated that some 12,000 Jays are killed each year in the UK for absolutely no reason. I’ve seen people try to justify the killing of Jays because they take the nests of declining woodland species such as Hawfinch, and yes they may take a few, it is natural, they are not driving population declines.

There has been a lot of talk in the last few months about a ‘green recovery’ and how we need to seize this opportunity to bounce back in a way that is good for the climate and nature. One widely touted action that will help us restore nature and tackle climate change is to plant lots of trees – it was also a rather silly sound bite from the last election with each political party promising to plant several million more trees than the other party. Jays are pretty good at caching acorns and I’ve read estimates that an individual bird can store 3000 each autumn (apologies, I can’t remember the reference and no doubt there are other estimates). Not all will be relocated and many of these will then germinate – maybe Jays are better at planting trees than we are? Maybe that’s another reason why Forestry England, Natural Resources Wales and Forestry & Land Scotland don’t kill Jays (see the links to Mark’s blogs above)? Free labour.

A few days ago I read on my Twitter timeline something about how large whales are actually worth a lot of money when you put a value on them because they help lock up carbon and they provide ‘us’ with an ecosystem service. I’ve not had time to look for the specific articles but if scientists can work out how much a whale is worth, maybe they could do the same for Jays?! I don’t like the concept of assigning a monetary value to species even though it is becoming an increasingly used concept in nature conservation – give something a value and the money men will save it. Jays are good at helping to spread trees – it’s one of their ecological ‘jobs’ – just provide them the land and let them get on with it. How much is that ecosystem service worth? How much monetary value should we give an individual Jay?

Jays are one of those birds that I nearly always raise the binoculars for when I’m out birding even though I know what they are and they’re not rare. I’ve particularly enjoyed watching Jays this autumn. I’ve found the lockdown of the last few weeks much tougher going than the spring one, when the longer day length meant it was much easier to get out for some natural therapy. How do you put a price on the pleasure that an individual gets from watching one of nature’s great hoarders?

I couldn’t recall the collective noun for a group of Jays and a quick internet search resulted in a band, party, scold or cast of Jays. I have to say all are rather underwhelming for such a beautiful and intelligent bird.

I propose that the collective noun for Garrulus glandarius should be a joy of Jays.