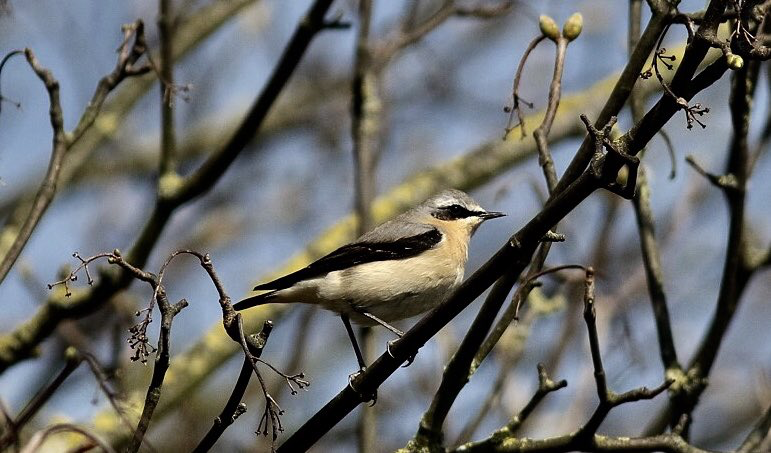 At the turn of the year I decided to keep a record of my UK birding trips and calculate the amount of carbon they generate. During the month of January my UK birding resulted in 0.139 tonnes of carbon and 114 bird species recorded.

February was a relatively quiet month for birding in the UK as I was mainly working abroad, but I did spend a bit of time on the local patch of Wanstead Flats and Park, plus a visit to a couple of sites near Thetford tagged on to a visit to the BTO Headquarters for an OSME Council meeting, as well as looking out the garden window on a few occasions. I deliberately chose to use the bus, rather than the car for more visits to the patch, although it adds between 30-45 minutes per trip. The five patch bird lists for February were made over four separate journeys, three of which were by bus. As I was travelling to Thetford primarily for a non-birding visit, I have only included the additional mileage to the birding sites of Santon Downham and Lynford Arboretum. I see this as maximising the value of my carbon. By having a very early start and doing some pre-meeting birding, and then some post-meeting evening birding before heading home this potentially saves on the necessity for separate trips. I took the same approach for my birding in Herefordshire which was actually to visit family, but whilst there I had one early morning walk where I recorded all the birds I saw. I’m sure not everyone will agree with this approach, my birding is still resulting in carbon emissions. Overall, February was not a particularly productive month for UK birding, but a good one for reduced carbon at just 0.012 tonnes (see table below). 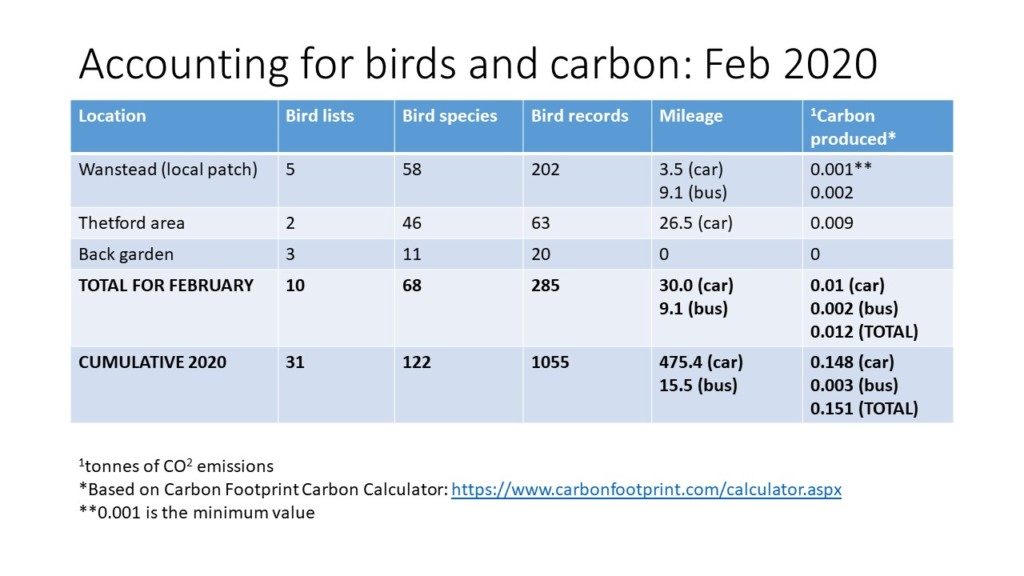 One of my favourite months for birding is March as the much anticipated spring migration starts to get underway. For me there is something special about seeing the first spring migrant of the year – usually a Wheatear. Since 2018 on the local patch there has been the prestigious Wanstead Wheatear sweepstake organised by Tony Brown (Twitter @TheCowboyBirder) where we ‘compete’ to be the first to get the said species on the patch list. Congratulations Jono. It’s a bit of light-hearted fun, but it does encourage a greater emphasis on local patch birding (and thus reduced carbon), at least for a few weeks. In the middle of the month I did have a couple of full days out, one in Suffolk/Norfolk and another one in Kent, which bumped up the carbon emissions for March. I also reversed my reliance on the local bus to visit the patch as the coronavirus started to take hold, and then towards the end of the month birding was confined to the back garden. Usually I only count birds that occur within the actual garden, but this would have made for a rather dull experience, so I now have an ‘extended’ garden list – more on this soon. With 0.141 tonnes of carbon produced and 115 bird species seen, March was on a par with January (see table below). 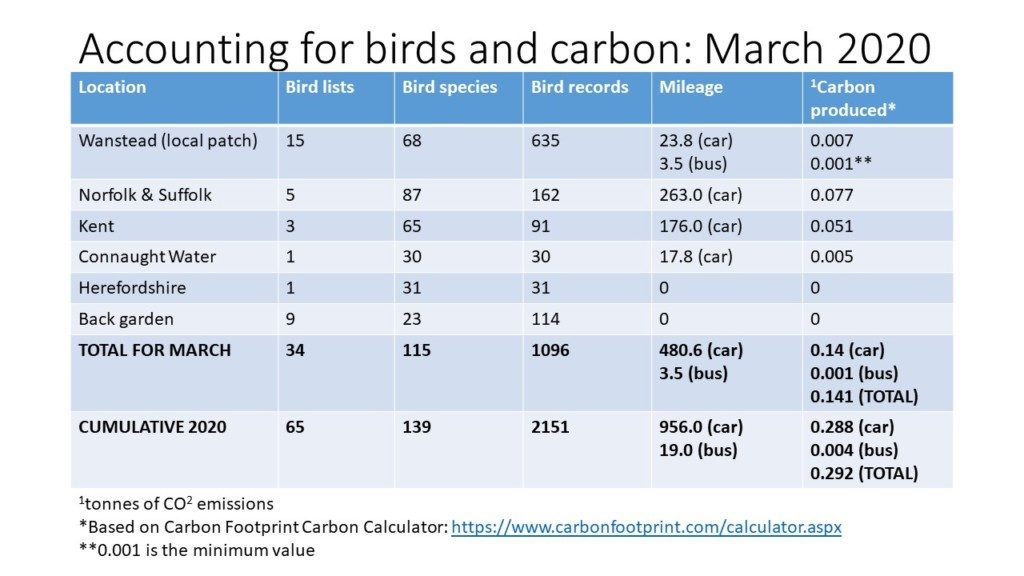 So far in 2020 my UK birding has generated a total of 0.292 tonnes of carbon to record 139 different bird species. According to BirdTrack I have generated a total of 65 complete bird lists with 2151 bird records. I’m still not sure what all this means and how important it is, but next month I aim to try and look at this in a bit more detail.