Hen Harriers are wonderful birds. Watching them ‘skydance’ over moorland is an unforgettable experience. Observing them quartering upland heath in the spring or grazing marsh in the winter are moments to savour. The science tells us that there should be in the region of 330 pairs in England, yet last year there were just three successful nests, from a total of seven attempts, producing ten fledged young – sadly 2017 was not an exceptional year, or maybe it was compared to 2013 when there were no successful breeding Hen Harriers in England at all! Hen Harriers have the audacity to prey on Red Grouse chicks, amongst other species, and thus are not welcome on moorland managed for driven grouse shooting. They are mercilessly killed to protect the interests of those who make large amounts of money from shooting Red Grouse. Such Victorian attitudes are confining one of nature’s most amazing spectacles to the history books – England’s uplands devoid of breeding Hen Harriers is becoming the new normal.

I’ve not seen any Hen Harrier breeding figures for this year, it is still a bit too early to be sure of the final numbers. But one particular announcement in the last few days caught my eye. The National Trust in the Peak District published a statement on their website ‘welcoming the return of the skydancer to the High Peak.’ A Hen Harrier nest has been found on land managed by the National Trust that contains four healthy chicks. This is fabulous news. This is the first time they have bred on the National Trust’s High Peak Moors for four years. The news has done the rounds on social media, and rightly so, as at first glance this really is a positive story that should be celebrated. All those involved should be congratulated on giving the Hen Harrier a helping hand, my god, they need it. But let’s not forget, that if the chicks survive, they have far more perilous times ahead. For now, this is good news on a par with England’s realisation that they can win a penalty shootout!

For the illegally persecuted Hen Harrier in England our expectations have become so low that we welcome slivers of hope. How can it be that in 21st Century England, a breeding attempt of one of our most protected species, on land managed by a conservation NGO within a National Park, is good news? 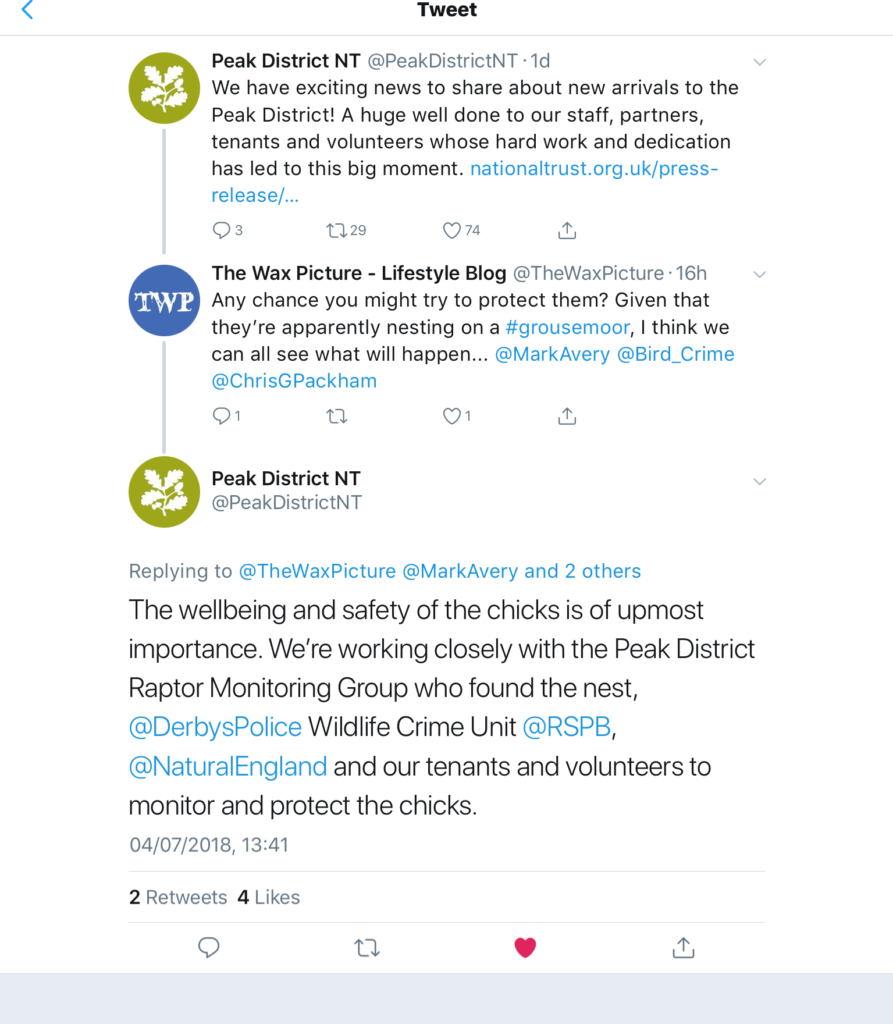 This short Twitter thread highlights so much that is good and so much that is bad about the state of how our uplands are managed for protected wildlife. The delight that a good news story is worth sharing, the scepticism of someone who associates Hen Harriers with bad news, the explanation that volunteers, police, raptor workers, other NGOs, tenants will all be required to monitor and protect the chicks. One could be forgiven for not realising that this Twitter thread was about a protected species, on land managed by an NGO in a National Park in England. For the Hen Harrier in England our expectations are truly underwhelming.