I queried the discrepancy and Natural England replied in a matter of 48 hours, for which I’m grateful. Apparently the figures I’ve been provided are correct. From the figures I’d been provided I had worked out that 27 Ravens from 3 licences covering 8 farms could be killed in 2018. In the Natural England blog we were informed that for 2018 – “There is currently only one licence live in 2018 covering three farms and 15 ravens.” The blog had failed to mention the other licences that covered 2018, probably as one was issued on the 30th June – at least is was signed on that date, and the licence covered the period 1st July until 30th November 2018 (covering 8 Ravens). This licence would have been issued after the blog was composed although surely it would have been known about when compiling the figures for the blog that was posted on the 5th July. Anyway, this was the reply I got yesterday morning from NE: “You asked how many licences were issued to kill ravens in the last 5 years. The response given to your original request was correct, as it included licences issued that had expired. The blog dated 5 July 2018 stated that there was one live licence (this was 2017-31116-SPM-WLM-2 which actually expired on 30/06/2018 for 15 ravens and was live when the blog information was collated but had expired by the time the blog was published. Further, a new licence (2018-35849-SPM-WLM) was issued on 01/07/2018 for 8 ravens, so there is still one live licence currently). We have correctly answered your question as the blog only quotes one live licence, not how many were issued and have expired.”

There seems to be some data gymnastics going on here! In the NE clarification they say that they include licences that have expired – which appears to be the case for 2016 and 2017, but then only includes the ‘live’ licences for 2018, hence the lower figure. So the data I’ve been provided is correct and the data provided in the NE blog is also correct, but they have used different ways of compiling and presenting the data between years – ie all licences issued in 2016 and 2017 (including lapsed ones – which they should all be by default anyway) but then using only live licences at the time the blog was written for the 2018 figures. These discrepancies have made me suspicious so I have gone back through all the licence information provided and checked and double checked again.

The way I’ve interpreted the data on the number of Ravens killed according to the licences issued by Natural England are within the Table below. There are a couple of footnotes that I have tried to explain and allocate the number of Ravens authorised to be killed in England per year. Some of the discrepancies appear to be due to the data being presented according to when the licence was issued or when the licence was active. As the clarification that I sought from NE appear to emphasise whether a licence was ‘live’ or not, I used this as my reference point – the 3rd column in Table 1 below. 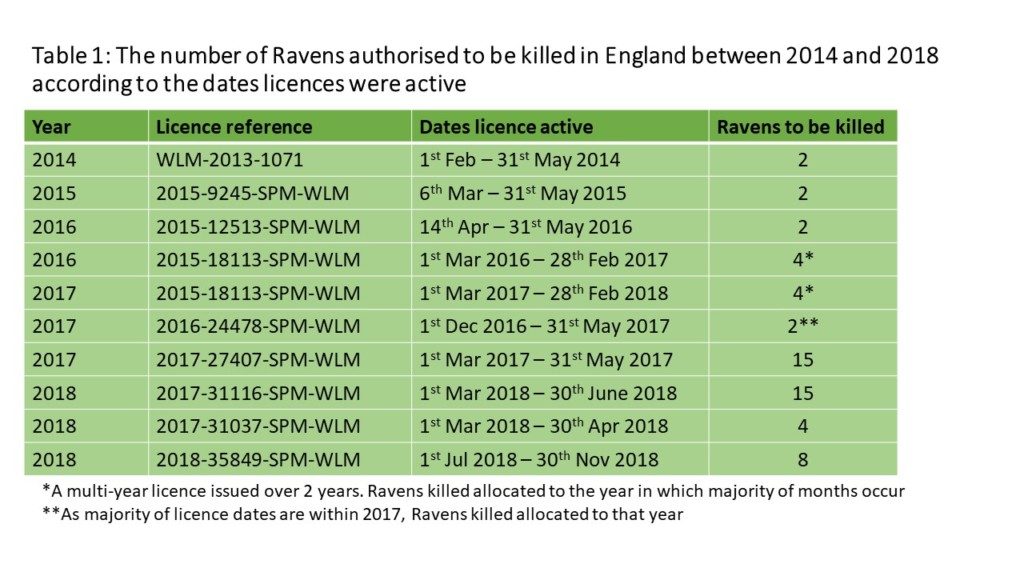 Changing these data to present them according to the date the licence was signed (which seems to be the approach taken in the original NE blog at least for the years 2016 and 2017 would lead to a few minor changes but not to the overall picture, see Table 2. 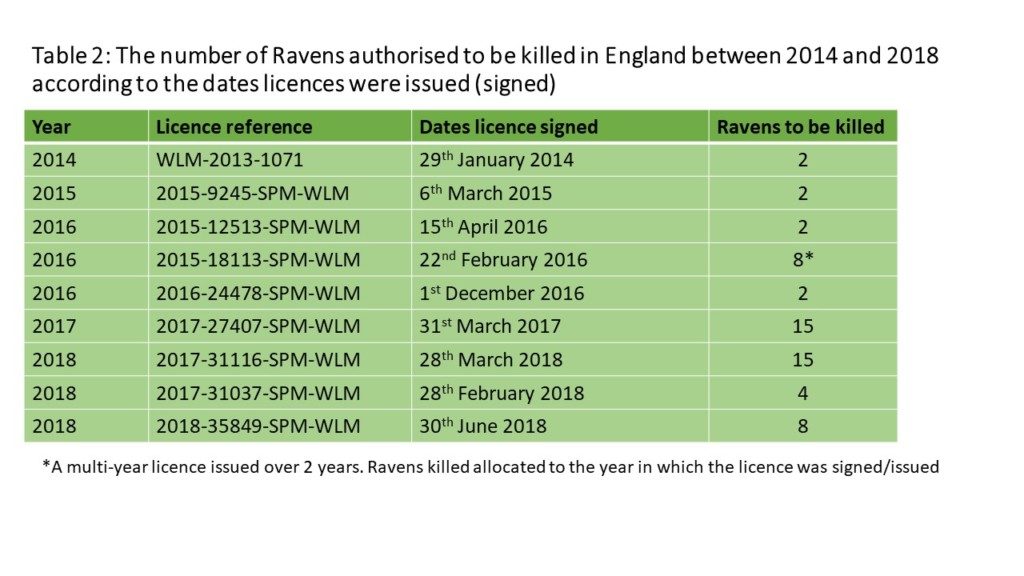 The data still don’t quite match, probably due to the way NE have presented the annual figures for the licence that was issued for multiple years. Ultimately, which ever way the data are presented, for the period between 2014 – 2018, licences have been issued authorising an overall total of 58 Ravens to be killed. Importantly, the data in the Natural England blog gives a misleading picture for the number of Ravens that can be killed under licence in 2018, and doesn’t make it clear that there is an upward trajectory in recent years. In fact in the penultimate paragraph, NE state that “there is no increase in activity or culls.”

Another way of presenting these data is using a couple of simple graphs using the figures from the above tables. 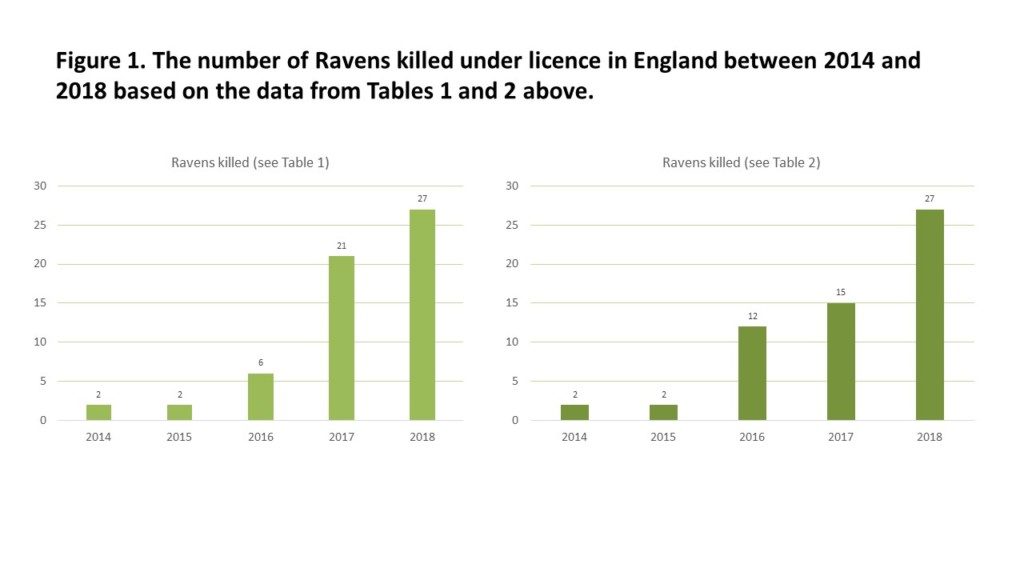 The graphs show the data in a much more meaningful way and the increase in the number of Ravens, albeit from a low starting point, that are killed under licence in England has grown substantially since 2014. I wonder if this trend will continue?