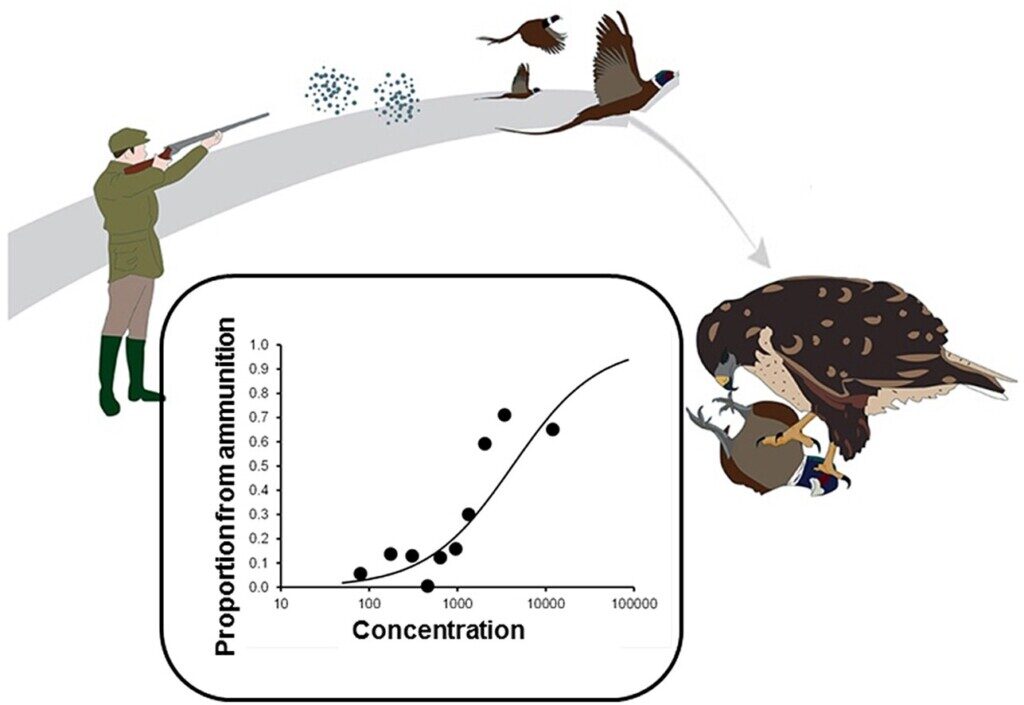 The use of lead ammunition in wetlands is on the verge of being prohibited in Europe, see here and here. This still needs to be approved by the European Parliament and Council. It has been a long battle to get to this point with the shooting industry in most countries, including (especially) the UK, resisting attempts to limit the use of toxic ammunition. Don’t forget the use of toxic lead has been banned for decades in petrol, water-pipes and fishing weights.

However, the use of toxic lead ammunition will, for now, continue in terrestrial habitats. Away from wetlands a different suite of birds will be susceptible to the effects of lead when they ingest it. The scientific evidence is growing, not that more research is really needed, that birds of prey are exposed to lead by ingesting it whilst scavenging on prey items that have been shot by hunters. The California Condor is probably the most well-known example of a bird of prey that is directly affected by lead poisoning – and last year California banned the use of lead ammunition.

An excellent piece of research published in the peer-reviewed scientific journal, Environmental Pollution looks at the concentration and origin of lead in the liver and bone of Buzzards (Buteo buteo) in the UK. The abstract is reproduced below, but for me the most interesting finding was the tendency for lead concentrations to increase substantially within years during the gamebird hunting season. And although the number of individual buzzards that had concentrations of lead in their livers consistent with acute exposure were small (2.7%), 89% of the mass of this lead was from ammunition. An argument I often hear in defence of the continued use of toxic lead ammunition (after many other defences have been exhausted) is that there is no population impact on whichever species you may be discussing. Indeed, given the rapid population increase (98% increase between 1995-2018 using BBS data) and range expansion of Buzzards in the UK, this may well be the case. But why would you want to unnecessarily introduce a toxin into the food chain? Indeed, into the human food chain, as most ‘game’ in the UK is shot using toxic lead ammunition. Another interesting finding outlined in the discussion section of the paper, is that when combining the data with that from a systematic review that reported mean lead concentrations in liver samples from France, Italy, Poland, Portugal and Spain (and also from another study in Denmark), levels in the UK were only exceeded by those in Italy. It is clear that regulation of ammunition in terrestrial environments will surely follow the phase out of toxic lead in wetlands. The shooting community (and governments) have dragged their heals over the phasing out of toxic lead ammunition in wetlands for decades – I wonder if they’ll do the same for terrestrial habitats?

The full paper is behind a paywall but the abstract is as follows:

Ingestion of lead (Pb) derived from ammunition used in the hunting of game animals is recognised to be a significant potential source of Pb exposure of wild birds, including birds of prey. However, there are only limited data for birds of prey in Europe regarding tissue concentrations and origins of Pb. Eurasian buzzards (Buteo buteo) found dead in the United Kingdom during an 11-year period were collected and the concentrations of Pb in the liver and femur were measured. Concentrations in the liver consistent with acute exposure to Pb were found in 2.7% of birds and concentration in the femur consistent with exposure to lethal levels were found in 4.0% of individuals. Pb concentration in the femur showed no evidence of consistent variation among or within years, but was greater for old than for young birds. The Pb concentration in the liver showed no effect of the birds’ age, but varied markedly among years and showed a consistent tendency to increase substantially within years throughout the UK hunting season for gamebirds. The resemblance of the stable isotope composition of Pb from buzzard livers to that of Pb from the types of shotgun ammunition most widely-used in the UK increased markedly with increasing Pb concentration in the liver. Stable isotope results were consistent with 57% of the mass of Pb in livers of all of the buzzards sampled being derived from shotgun pellets, with this proportion being 89% for the birds with concentrations indicating acute exposure to Pb. Hence, most of the Pb acquired by Eurasian buzzards which have liver concentrations likely to be associated with lethal and sublethal effects is probably obtained when they prey upon or scavenge gamebirds and mammals shot using Pb shotgun pellets.