Giant Tesco and the Tiny Swallow

Giant Tesco and the Tiny Swallow 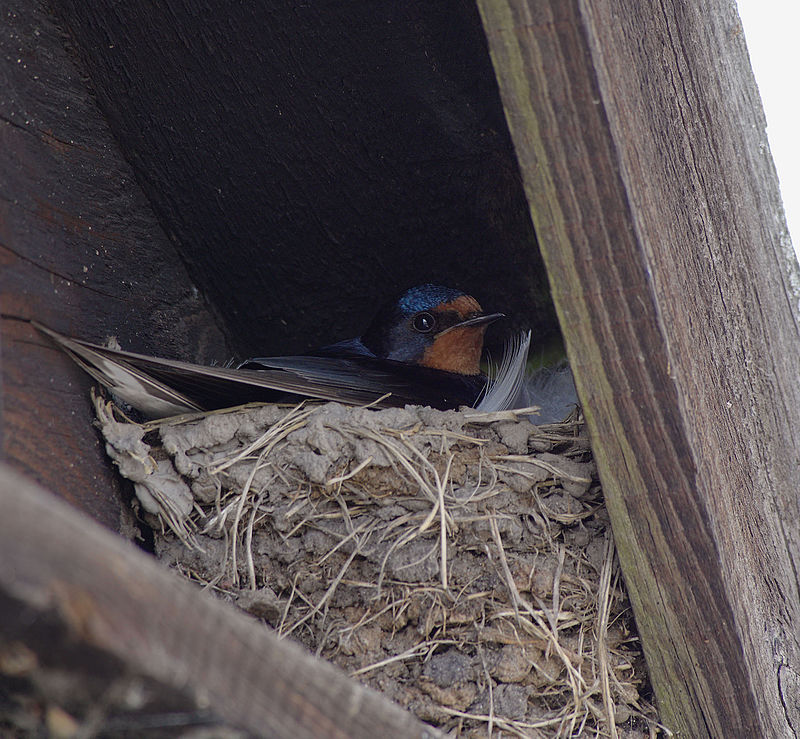 Despite the rather unsettled weather, spring is definitely in the air. In just a matter of weeks migrating birds will be making their way back to the UK, and wintering birds will be heading to the Arctic. The annual migration that some of our most loved birds take is often rather hard to comprehend. Take the Swallow, a bird that many people will recognise, and often associate with the heralding of spring. In the autumn of each year, adults and young alike will start a migration that takes them over several seas and deserts, facing a daily challenge to survive. After a journey of some 10,000km they spend the winter in southern Africa, and then in March start the long 10,000km journey back to their nesting grounds. Swallows are site faithful, so they return to pretty much the same nesting site each year. When you think about it, it is a journey that we can’t really comprehend. A 25g bird flying 20,000km each year. Just think of the conditions outside your window today, it’s probably raining, and it’s certainly windy – gusts of 60km/h are likely to occur in parts of the UK today. But despite their tiny size, Swallows are giants of the bird migration world.

I’ve noticed a lot of Tweets on my Twitter timeline in the last week about the issue of netting being used to stop birds from breeding – usually by developers it seems, presumably to stop birds nesting and thus delaying whatever development they are working on. It’s a rather sad example of how bad our relationship with nature has become – I might write about this if I get time next week. In the meantime, one Tweet really made me think (@Kateblincoe). It referred to a Tesco store at Harford Bridge, near Norwich. The local store had decided that due to health and safety concerns, Swallows must be prevented from breeding. That will be a bit of a blow for the tiny Swallow that in just a few weeks’ time will return after battling over 10,000km to return to his/her ‘home.’ After receiving expert advice from a, what we might call, a pest control company – sorry Swallow, you’re a pest, the store decided to try and stop the birds nesting by putting up netting. Thanks to Janet Palmer (@ditsy_woman) for this reply from Tesco’s customer service team… 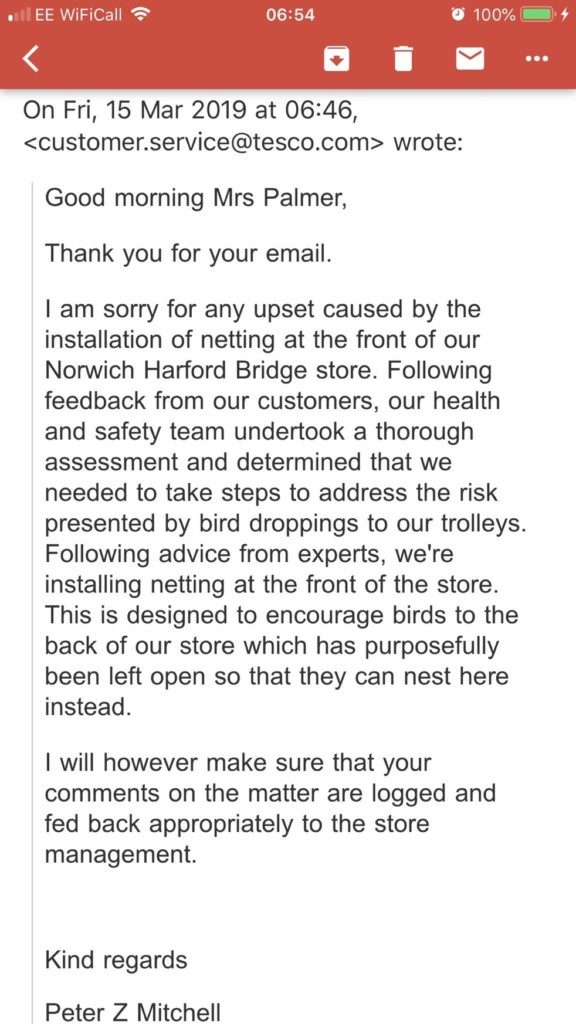 I did some more searching on Twitter, and this insightful radio discussion is well worth a listen. The sad thing about this is that Tesco knew exactly what they were doing. They had previously been made aware of the Swallows and presumably what joy they bought to the many people who would have encountered then on their weekly shop. It seems that a few complaints from some customers about bird poo on the trolleys has led to this rather drastic action. Again a rather sad example of how our relationship with nature has broken down. It surely isn’t beyond the powers of the Giant Tesco to come up with a more reasonable way of dealing with our Tiny Swallow? Dear Tesco, without knowing the site, here are a few that would be worth considering. Put up some boards a few feet below the nest cup to stop the droppings dropping. Move the trolleys!? Clean the trolley handles with a mild disinfectant – you could buy it at your local Tesco store! If you are one of the customers who complained, try using a trolley that doesn’t have any droppings on – it ain’t rocket science. Dear Tesco, have you thought of putting up some signs about how wonderful it is to have the Swallows back nesting at your store, and explaining their epic journey. I’m sure there are other solutions – Giant Tesco, you don’t have to destroy the life of a Tiny Swallow.