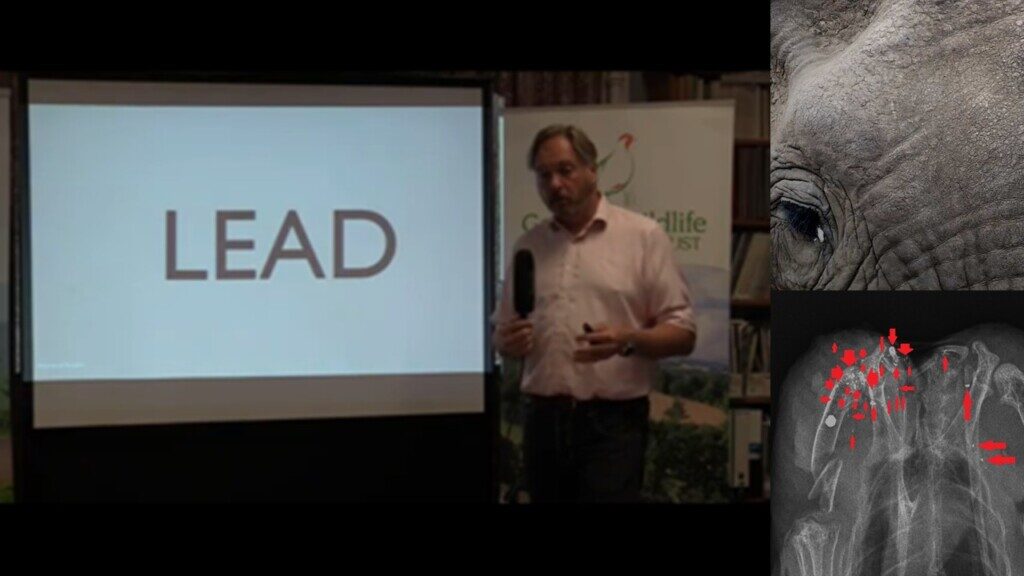 Yesterday, RPUK posted a blog containing a presentation by John Gregson to the GWCT’s Game 2020 conference – it is an excellent presentation and makes for compelling viewing. Much of what follows in this blog is taken directly from the presentation (hence the frequent mixing of grammar etc).

John Gregson is the Communications Manager, CSR, Heath & Agriculture for Waitrose supermarkets, and he opens his presentation by emphasising he’s a life-long shooter, and he’s clearly proud of it. He’s not an anti-shooting extremist. He also clearly and unashamedly makes the point that he was the one who wrote the Waitrose lead policy and is responsible for Waitrose’s decision to ban lead from its game-meat supply chain. He then goes onto explain why he made this decision.

Waitrose is the largest retailer of game-meat in the UK and they sell partridge, pheasant & woodpigeon (venison is sold but it is farmed) – and they recognise that there is still more opportunity to grow sales as a healthy alternative to, for example, beef. People like eating game – I agree, I do too, but haven’t for years (except venison from a known lead-free source) – but there is an “elephant in the room” – LEAD. 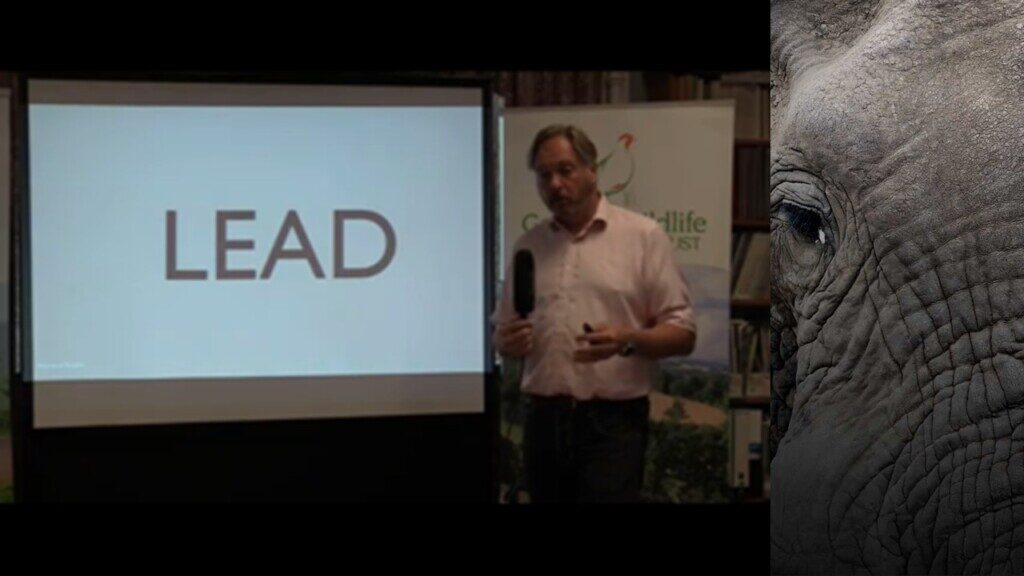 John made a rather hard-hitting statement directly addressing the audience, presumably largely consisting of those who participate in game shooting, by stating that he firmly believed that ‘you all knew that it [lead] was a problem – there is no getting around the fact that it is a toxic heavy metal with no agreed safe limits.’ Scientific evidence has been there since 1983 that it poisons wildfowl extensively – spent lead shot is an issue for wildfowl and waders – they ingest it and die a pretty horrible slow painful death. We should be concerned about that. These kind of deaths we’ve sought to prevent in our own species by banning lead from paint and petrol and water pipes. The dangers of lead in petrol (and paint) have been known about since the 1930s – we can’t claim that this is a new issue- we’ve known lead is an environmental poison for well over a century yet we continue to shoot with it. [Presumably such an argument also applies to Waitrose too – or is that being churlish? However, it is a good thing that they have had this very recent Damascene conversion despite more than 30 years of scientific evidence]. John estimated that the Waitrose supply chain puts about 65 tonnes of toxic lead into the environment every year/season. A conservative estimate of lead going into the environment from shooting is in the region of 5000 tonnes per year – an extraordinary amount of a poisonous material that we’re not even allowed to put in paint anymore, but we cheerfully eat it. Even the best processors can’t get rid of all of it – there’s lead residue, there’s lead fragments in game meat.

He congratulated the shooting organisations for announcing earlier in the year that they were getting behind a ban on lead – but then made it perfectly clear that we don’t have 5 years to get rid of lead. I wonder if the ‘5 year’ statement was aimed at BASC et al who seem to be back-peddling? 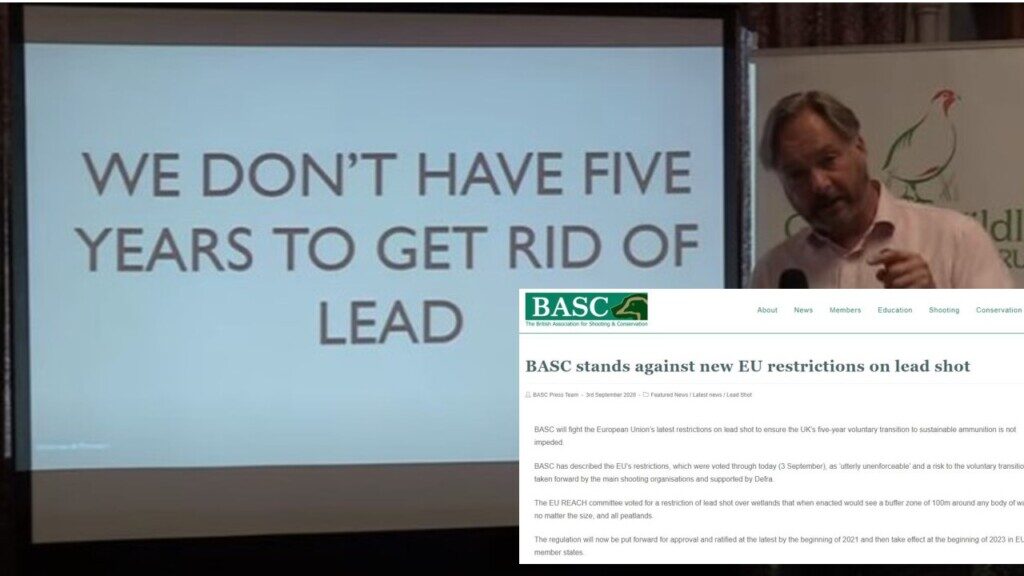 John emphasised that it is highly respected scientists that are providing the evidence that shows that a ban on lead is needed (to be fair, they’ve been doing it for almost 40 years). Pointing out that they should be listened to and not derided by shooting people. This is hard science, Debbie Pain* and Rhys Green* are the truth-sayers in all of this (in my opinion, one of the best sentences in the whole presentation). These are not people who are trying to ban shooting, they are saying go shooting but don’t use lead.

Apparently John has received many ideas and suggestions for new products, including game-based snacks aimed at children – brilliant – if you don’t get rid of lead can you imagine the conversation with a supermarket buyer. Nobody is going to accept a range of kid’s snacks that may contain lead. [Although of course many supermarkets, food retailers and restaurants continue to provide lead contaminated food to consumers often hiding behind the phrase may contain shot (often not mentioning lead)]. 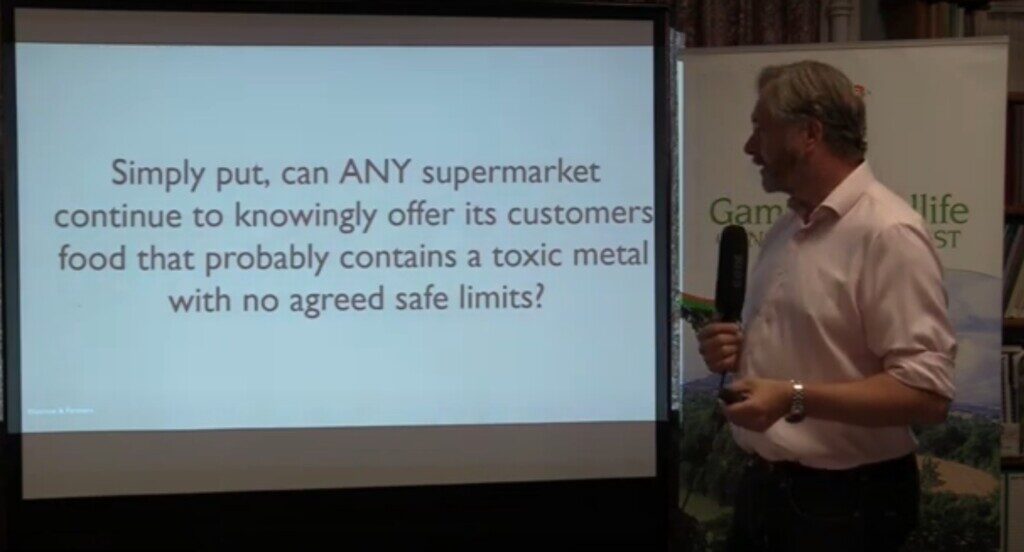 John outlines how as a supermarket we need to maintain trust – in the game market, lead is what we would call a trust breaker (this is my favourite sentence of the whole presentation). The presentation then spends quite a bit of time talking about millennials and their traits and needs as a consumer. One point that was made is how they like transparency, and why lead is an issue for Waitrose/the food industry. Lead is such an outlier for the whole food industry – he didn’t elaborate on this point but I assume he means that lead is the only toxic metal we voluntarily add to our food?

He concludes the excellent presentation with what I would interpret as a cross between a call to arms (no pun intended) and a warning. If we (presumably the shooting industry) take the lead out, we can win the moral argument around shooting, but we can’t win the argument on science when the weight of scientific opinion is against what you are doing. Lead has got to go otherwise there will be no future for game – the most important thing is the future is in our hands, we can fight for the status quo, stick our heads in the sand, if you refuse to accept change, then change will be imposed on you.

The presentation is excellent and is really worth watching (several times). It is a shame that the Q & A session doesn’t appear to be available. There is nothing really new in this presentation, it is the person, and his position within the UK’s leading game-meat retailer, that will resonate.

The full presentation is in the link below…..

*Debbie Pain & Rhys Green are highly respected scientists who have been working on the issue of lead for decades. They have published numerous research papers in peer-reviewed scientific journals. They are experts in their field. Like scientists who challenged the use of lead in paint and petrol they have been derided (to use John Gregsons’s words) for standing up to vested interests.

Photo credits: all images are screen grabs from John Gregson’s presentation, except the elephant (source unknown) & the x-ray (via Mark Avery’s blog)