Previous blogs on the subject of licensed Raven killing have shown that in England the numbers being legally killed are increasing. See here.

Ravens are being killed in Wales to protect livestock and to protect non-native pheasants. See here.

In summary the total number of licences issued between January 2014 and July 2018 in England and Wales are 13, with up to 107 Ravens legally killed, thanks to permissions granted by the statutory conservation agencies.

How about Scotland? We know that earlier this year Scottish Natural Heritage (SNH) issued a year-long research licence to permit the killing of 69 Ravens in the Strathbraan area of Highland Perthshire. This licence formed part of a proposed five-year experiment to allow the killing of 300 Ravens on the pretext of ‘seeing what happened’ to the breeding productivity of waders in the area, even though peer-reviewed scientific studies suggest Ravens are not responsible for wader population declines. The licence was quietly issued without prior consultation with other stakeholders, notably the Scottish Raptor Study Group (SRSG), whose members have been monitoring the local Raven population for over 30 years. Following a legal challenge by the SRSG, the licence was revised and the cull was suspended, although 39 Ravens had already been killed. Full details of the Strathbraan debacle can be found on the Raptor Persecution UK blog.

However, it appears that the Strathbraan licence was just the tip of a rather large Raven killing iceberg. What was unusual about the Strathbraan licence was that it was issued as a ‘research’ licence. Following a Freedom of Information request, details of other Raven licences have been made available. To compare the figures with England and Wales I asked for the number of licences issued between 2015 and 2018, as well as the details of those specific licences. I’m most grateful to the staff at SNH for providing me with most of what I asked for.

The numbers are rather staggering, at least to me! An incredible 621 licences have been issued in the last 4 years allowing for up to 4124 Ravens to be killed. Not all licence holders kill their allocation but approximately 75% of those permissible are killed (the figures aren’t available for 2018 yet). So in Scotland somewhere in the region of 3000 Ravens have been legally killed in the last 4 years (Table 1). 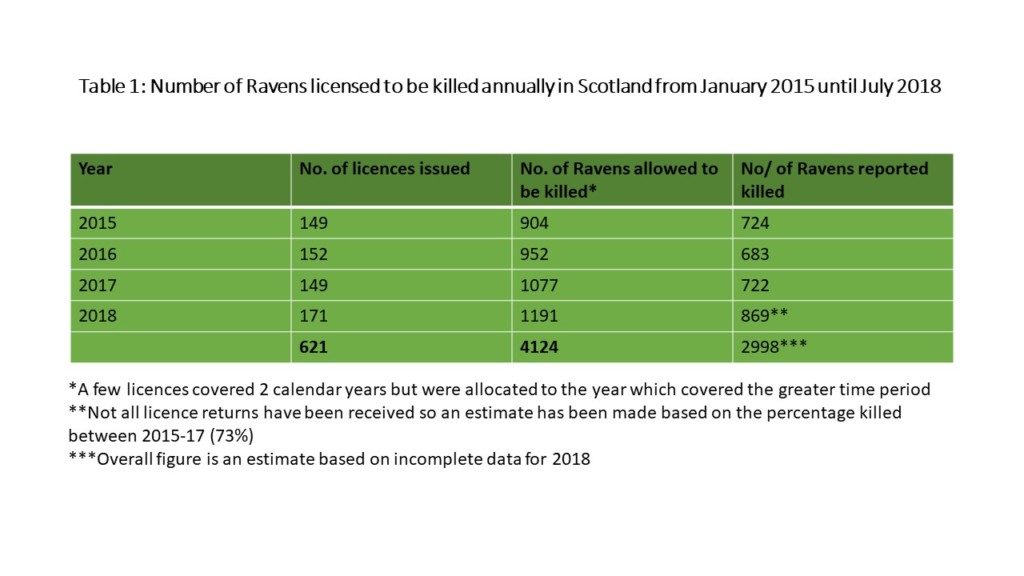 SNH has commissioned a scientific report from the British Trust for Ornithology (BTO) to look at the population effects of the Raven killing. The results are yet to be released, but correspondence with SNH suggested it is working on a revised population size of 3241 pairs of Ravens. Including the non-breeding population, which could add approximately another 6500-13000 individuals, the population size seems to be in the region of 12,982-19,482. How allowing the licensed killing of approximately 700 Ravens (3-5% of the Scottish population) a year will impact on the overall population remains to be seen, but the commissioned report should give us some answers to many questions.

It is worth noting that in the recent bird trend data that was released by SNH, Ravens declined by 12% between 2016-17 (against the back drop of a longer term increase between 1994-2017 of 59%). The full report can be found here and the Raven figures can be seen in Table 1 on pages 7 and 8. Variation in trends from year to year aren’t always easy to understand due to the range of pressures that any particular species faces. Given the significant culling of Ravens in Scotland it seems highly plausible that there must be an impact at the population level – hopefully the SNH commissioned report will shed some light on the implications of removing a minimum of 3000 Ravens from the Scottish population. Despite the early warnings of a recent decline in Raven numbers, I’ve seen no suggestion that there will be a decline in the numbers of licences to be issued. I’ll be looking at Scottish Raven killing again early in the New Year.