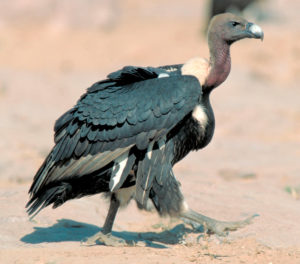 Asian Gyps vultures have declined by more than 99% and are on the verge of extinction. Indeed, many vulture populations around the world are declining at an alarming rate and are now the most threatened family of birds on the planet. In Asia conservation actions have been underway since the end of the 90s, initially spearheaded by the RSPB and BirdLife International, and more recently by the SAVE partnership. You’ll often hear about how the decline in vultures is having a major impact on health and the environment. In India with millions of vultures wiped out by diclofenac poisoning, there has been an increase in carcasses lying around and an increase in scavenging dogs leading to greater instances of rabies. Making a living as a hide and bone collector is more difficult due to the masses of vultures no longer stripping the bones clean. And traditional Parsi ‘sky burials’ in the specially designed burial towers where bodies were consumed by vultures are no longer possible. Of course, these are all true and sad consequences of the crash in vulture populations. In modern conservation parlance, vultures play a vital ecosystem service.

Last month I was fortunate enough to spend a few weeks visiting a range of projects in Bangladesh, including the vulture conservation initiative run by IUCN Bangladesh. A key concept in the battle to save Asian vultures is the establishment of Vulture Safe Zones where the use of diclofenac for livestock is largely eradicated. Basically such safe zones will enable existing wild populations to persist and potentially provide havens for captive-bred birds to be released back into the wild. There are two such havens in Bangladesh and I visited the Rema-Kalanga Wildlife Sanctuary at the core of the Greater Sylhet Vulture Safe Zone.

It was great to spend half a day with Sarowar Alam Dipu and Tarik Kabir (Program Officers for IUCN) and a number of locals who make up the community based management committee for the site. The focus of this area was to protect the existing wild breeding population of White-rumped Vulture (Gyps bengalensis) that had approximately 24 active nests in 2016. For a species that has undergone such a rapid decline this is a hugely significant population. Also in the area are wintering and feeding Himalayan and Eurasian Griffons, often totalling more than 120 birds. The project team have made amazing progress in a short space of time. At the national Government level, two Vulture Safe Zones have been declared under the Wildlife Act. Local Vulture Conservation Teams have been set up. At Rema-Kalanga a safe feeding station has been established and a new viewing point has recently been constructed. All this has happened in just a few years and is testament to the enthusiasm and passion of the local team. My visit coincided with a carcass being put out for the vultures, but on this occasion none were present. As Tariq explained, we were probably 24 hours too early as the vultures don’t like their meal “too fresh!” We did get brief distant views of a couple of soaring White-rumped Vultures. We also had time to check on the progress of one of the nearby nesting pairs. A single chick could be seen from a distance, probably about 2 weeks old, and according to the local nest monitors, looking very healthy for its age.

Overall I spent about 5 hours at the site and what really struck me was the sheer enthusiasm for the birds. Vultures are magnificent birds of prey and that’s what we talked about. We marvelled at how they soared effortlessly without taking a single wing beat. How did they know that the carcass was too fresh? Could they smell it (or not)!? Isn’t it a shame that we missed the spectacle of a hoard of hungry vultures ripping apart a carcass and stripping it down to the bare bones in a matter of minutes? Vultures are an integral part of the landscape that we were in and something would be missing if they were not circling the Rema-Kalanga Wildlife Sanctuary. At no point did we mention ecosystem services or what is the economic value of a vulture. Important concepts that these may be, we just wondered at the vultures because, well, because they are vultures.

Read more about SAVE here

Read about what BirdLife International are doing for vultures here

Read this recent scientific appraisal of vultures and other scavengers here

This site uses cookies and allows you to submit personal details. By continuing to browse the site, you are agreeing to our use of cookies. Find out more.