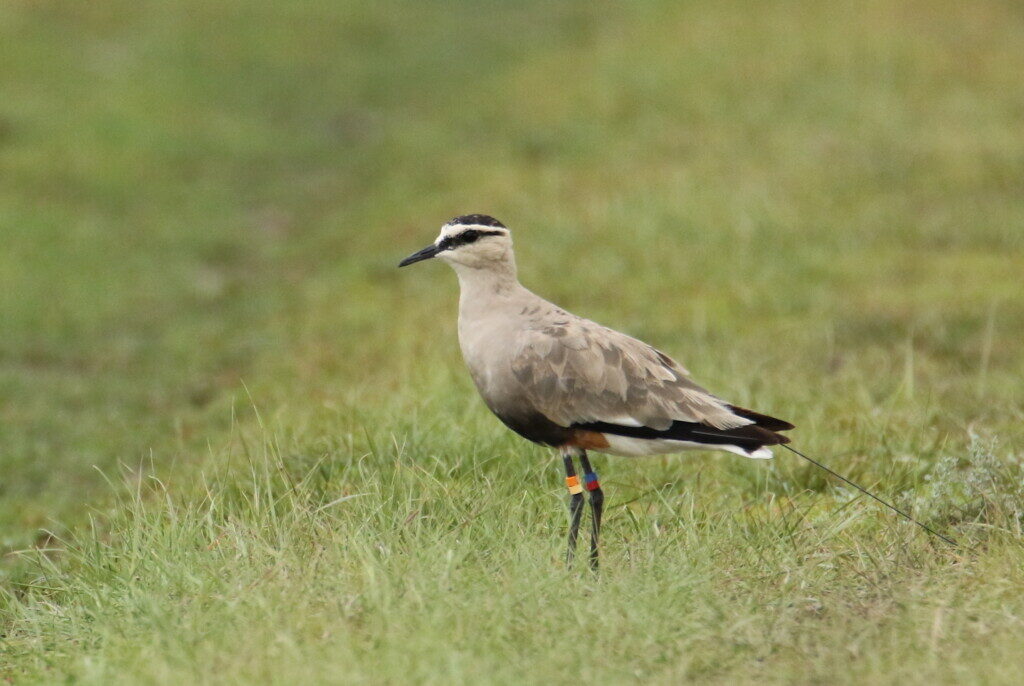 Over the last 15 years I’ve worked with some fantastic colleagues on the Critically Endangered Sociable Lapwing Vanellus gregarius. In the last few months two long-running components of that work have resulted in two recent publications. Back in 2007 we started a programme of work to help us understand the migration routes, stop-over sites and wintering grounds. This involved a combination of satellite-tagging, colour-ringing, field surveys and the collation of historical records. This has now been published in the Journal of Ornithology. Unfortunately it is not freely available but Graham Appleton has produced an excellent blog that summarises the key findings, see Wader Tales. The abstract of the paper is as follows:

Population declines of the critically endangered Sociable Lapwing are probably due to high mortality along its migration routes or on its wintering grounds, both of which are very poorly known. We therefore undertook a long-term study of the species’ movements using satellite tagging, colour-ringing, targeted field surveys and a database of historical and recent sightings. We identified two migration flyways from the breeding grounds in Kazakhstan; a longer western route (c. 5200 km) west through southern Russia, then south through the Caucasus to wintering areas in Saudi Arabia and eastern Sudan, and a shorter eastern route (c. 2800 km) south through Turkmenistan and Uzbekistan to wintering areas in Pakistan and north-western India. The migration strategy is characterised by infrequent long-distance movements followed by often lengthy stopovers in a small number of staging areas that are used consistently across years, and by high individual and low between-individual consistency in spatial and temporal patterns of movement. At least four main autumn stopover areas and one additional spring stopover area were identified along the western route, but only one autumn and one spring staging area along the eastern route. There was no relationship between latitude or longitude of breeding and the migration route used, and the same breeding colonies could contain breeding adults and produce chicks of both flyway populations, suggesting that no clear migratory divide exists within the breeding range. Sociable Lapwings spend around a third of the year on their breeding grounds, a third on their wintering grounds and a third moving between them. Birds were highly faithful to passage and wintering sites, but showed low fidelity to breeding sites. Stopover areas and wintering sites are usually located at the interface of dry steppe-like or desert habitats and agriculture, particularly irrigated cropland along rivers. This species selects agricultural habitats throughout its entire life cycle, and its heavy reliance on some of the world’s most anciently cultivated regions suggests that this synanthropic relationship may have evolved over millennia. The recent emergence of irrigated agriculture in the deserts of Arabia allows birds using the western route to winter far north of their previous wintering range and maybe to spread into new wintering areas along the coasts of the Arabian Gulf. The concentration of large numbers of birds at a small number of traditional stopover areas offers the opportunity to quantify the global population size, which we estimate at around 24,000 individuals (95% CL 13,700–55,560). However, it also makes the species particularly vulnerable to hunting and small-scale habitat change. Illegal hunting along the western flyway is identified as the most likely driver of the species’ decline.

One of the key findings of this research was the discovery of the key stop over site on the eastern route – Talimerzhan on the Uzbekistan and Turkmenistan border. On Saturday 23rd January, the Ornithological Society of the Middle East, the Caucasus and Central Asia (OSME) will hold their first online Winter Meeting, and Oleg Kashkarov will be talking about the protection of this important area. The meeting is available to all via Zoom and is free. Register here. 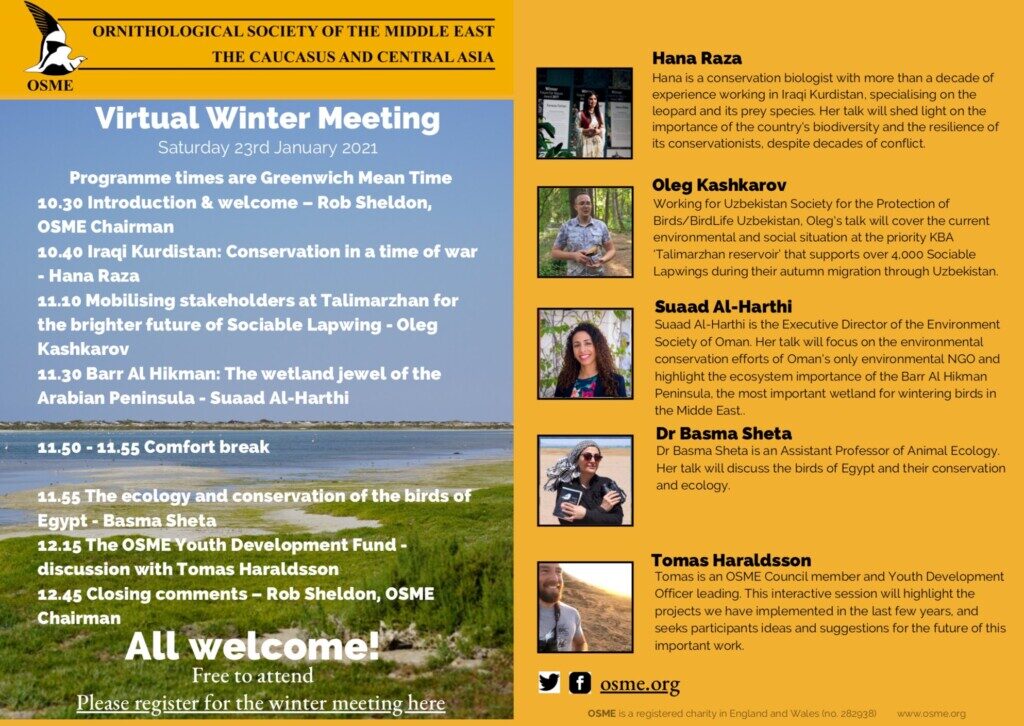 At another key stop-over site, this time on the western route, monitoring has been undertaken by Viktor Fedosov each year since 2009. This is the only long-term monitoring of migrating Sociable Lapwings and the findings are a cause for concern. The abstract is as follows:

We summarise the only long-term monitoring data for the Sociable Lapwing at a key autumn migratory stopover site. Large numbers of Sociable Lapwings were known to use the Manych depression area in the 1990s and an estimated 236–1013 individuals were recorded in 2006. Annual monitoring since 2009 has shown a steady decline in the number of flocks, average flock size and the maximum daily count of Sociable Lapwings. In 2019 only two flocks were recorded consisting of a total of four birds. The key habitats used by Sociable Lapwings within the study area were the edges of waterbodies, ploughed fields and pastures. During the study period there has been a decline in August rainfall and a reduction in the number of cattle, both of which may have impacted the suitability of the habitat for Sociable Lapwings. Due to a lack of monitoring of Sociable Lapwings at other stopover sites or in the wintering areas it is uncertain if the observed decline at the Manych depression is representative of trends in the western flyway population as a whole. 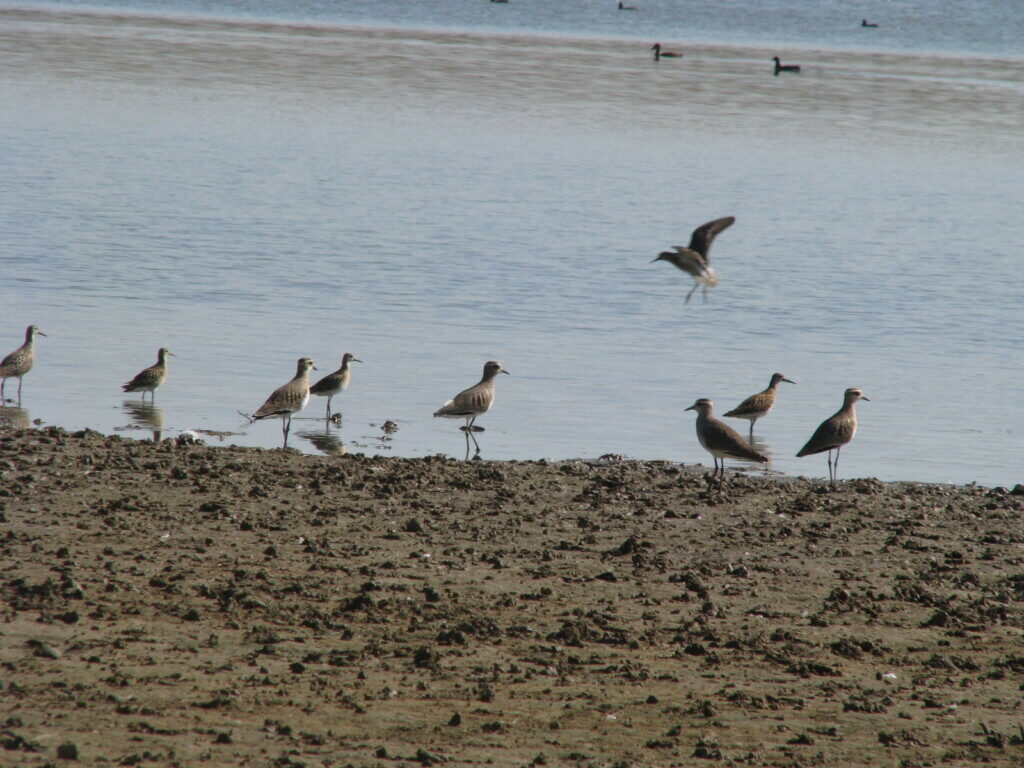 The full paper was published in the OSME journal Sandgrouse (volume 42(2)). If anyone would like a pdf version of the paper then please email me or leave a comment below. There are also worrying signs of a decline at our long-term study area in central Kazakhstan which we are currently writing up for publication shortly. Despite these declines at two sites, the Sociable Lapwing population is certainly much higher than it was thought back in 2005 when we started our research, although the trend is less clear – I’ll return to this in the near future.

Acknowledgements: The two research papers mentioned above were the product of many hours in the field with Paul Donald, Rhys Green, Johannes Kamp, Maxim Koshkin, Timur Iskakov, Ruslan Urazaliyev, Viktor Fedosov, Lyubov Malovichko and many others.