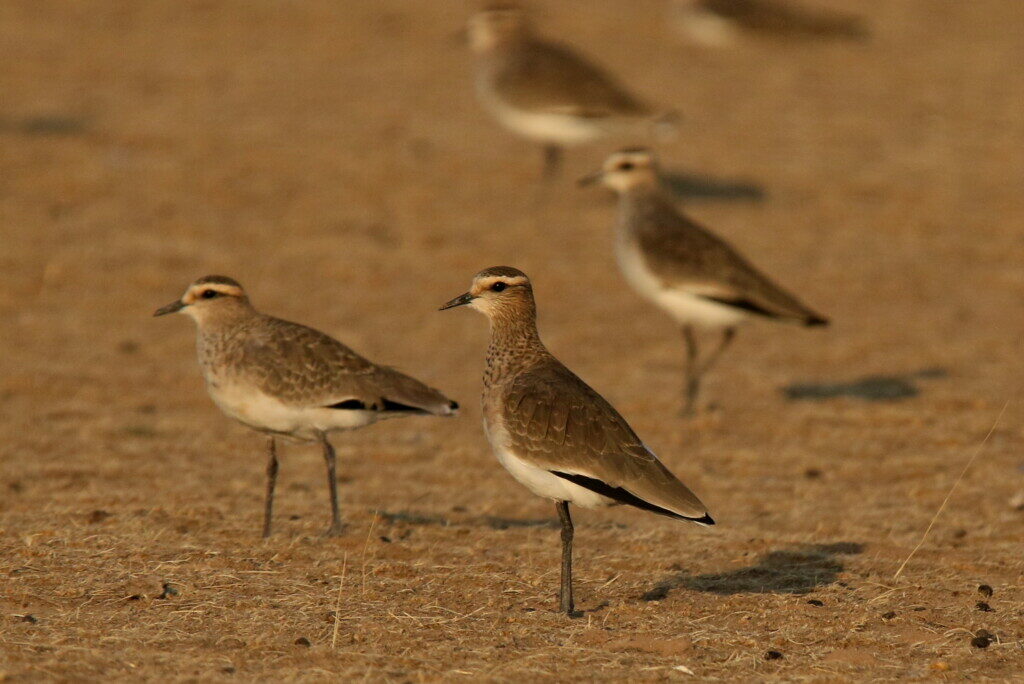 Arguably one of the most staggering discoveries in 15 years of Sociable Lapwing research and monitoring was the record number of birds counted near the Uzbekistan and Turkmenistan border in autumn 2015. Counts of 4225 in Uzbekistan and 3675 in Turkmenistan were the largest congregations of Sociable Lapwings documented since the 19th Century. These counts also changed our understanding of the two Sociable Lapwing flyways. It had previously been thought that the western flyway through south-west Russia, the Middle East and north Africa was used by the majority of the global population. It is now clear that the Sociable Lapwings that fly south to winter in Pakistan and India, represent a significant proportion of the global population. The co-ordinated counts at Talimarzhan (known as ‘Tallymerjen’ in Turkmenistan) in October 2015 resulted in an estimate of some 6000-8000 Sociable Lapwings using the area as a staging site on migration. Data from satellite-tagged birds showed that individuals used the area for between 32-59 days, before continuing their migration. No other staging sites are known along this flyway and Talimarzhan has minimal protection.

Since the discovery of this globally important staging site, the BirdLife partner, UzSPB (Uzbekistan Society for the Protection of Birds) has been working with local communities and the authorities to raise awareness of this crucial area. Various activities have taken place and information materials produced. 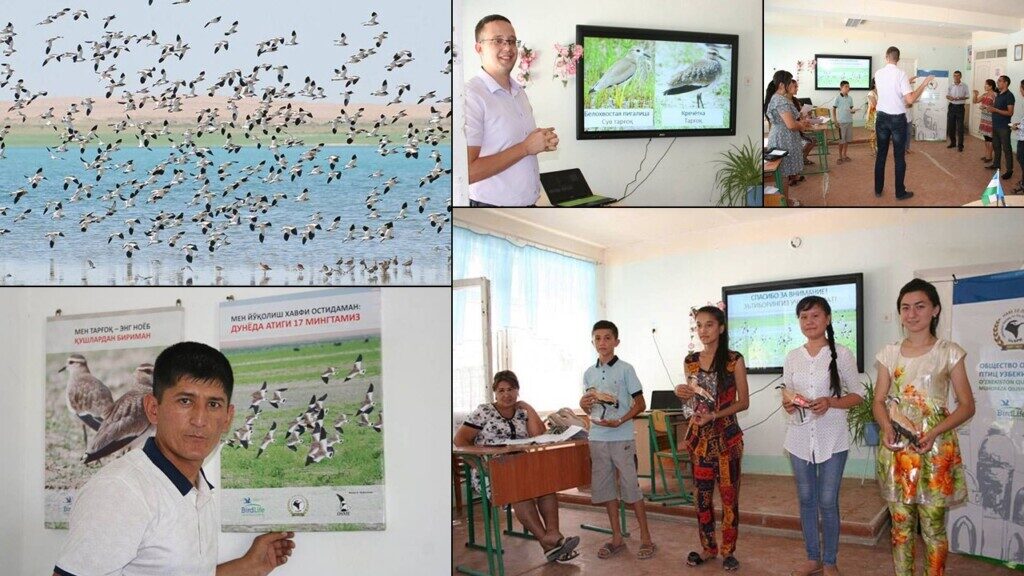 In 2018 and 2019 with the support of OSME’s (Ornithological Society of the Middle East, The Caucasus and Central Asia) Conservation Fund, local rangers, inspectors and hunters were trained on how to identify Sociable Lapwings and were invited to participate in monitoring the birds at Talimarzhan. You can read more about this programme of work here.

This year the Sociable Lapwing Monitoring Programme continues and weekly counts at Talimarzhan have been undertaken by UzSPB and the local site support group. On the 5th September 2200 Sociable Lapwings were counted and a peak of 4226 birds were recorded on the 30th. Last week 17 local participants joined in the counts, and only 500 birds were counted as the Sociable Lapwings are presumably continuing their journeys to the south. The plan is to undertake further counts on the 17th October as part of the Global Bird Weekend. Other Important Bird Areas will also be covered and co-ordinated by Oleg Kashkarov of UzSPB.

The abstract of the paper is as follows:

Since 2010, several Sociable Lapwings fitted with satellite transmitters on the breeding grounds in Kazakhstan have been tracked on southward migration to an area that straddles the border between south-eastern Turkmenistan and south-western Uzbekistan. The birds tracked along this migration route stopped at this site, called Tallymerjen in Turkmenistan and Talimarzhan in Uzbekistan, for prolonged periods, suggesting that it might be an important staging site for birds en route to wintering grounds in India and Pakistan. In September and October 2015, we undertook coordinated counts on either side of the border to assess for the first time the number of birds using the site, their habitat use and diet and the threats they may face. Counts of 4,225 in Uzbekistan and 3,675 in Turkmenistan represent the highest numbers of the species recorded anywhere since the nineteenth century. Movements of birds between the two countries were hard to quantify because of the restricted border zone, but the total number of birds using the area was estimated at between 6,000 and 8,000. This may represent the species’ entire eastern flyway population and perhaps a third or more of its global population. Field observations and data from two satellite-tagged birds present at the same time suggested a complex pattern of daily movements and resource use, which may have been influenced in part by the intensity of moonlight. Birds moved between heavily grazed steppe-like areas, irrigated arable fields and the shoreline of a large reservoir. The large number of birds present and the long period they remain here on south-bound migration make this one of the most important sites in the world for this critically endangered species. The sensitive border zone is likely to deter hunting by people, a significant threat in other areas of the species’ flyway. There has been a huge expansion of irrigated agriculture on both sides of the border since the mid-1970s, with a consequent loss of steppe-like habitats. Desertification caused by overgrazing has caused the appearance of shifting sand dunes in areas where they were not previously present. Many of the key areas for Sociable Lapwings fall within two existing Important Bird and Biodiversity Areas (IBAs), which are listed for their importance for other species. Regular monitoring of this staging area and the number of Sociable Lapwings using it is a key action in global efforts to protect the species and reduce threats to it. The discovery of this staging site is a graphic illustration of the significant contribution that even small numbers of satellite tracking devices can make to our knowledge of threatened species.

Over the years the various strands of the Sociable Lapwing research, monitoring and conservation efforts have received funding from a wide-range of sources including the RSPB, the UK Government’s Darwin Initiative (here and here), Swarovski Optik (the BirdLife Species Champion for Sociable Lapwing) through the BirdLife Preventing Extinctions Programme, the African-Eurasian Waterbird Agreement (AEWA) and the German Ornithological Society (DO-G), the Mohammed bin Zayed Species Conservation Fund (MBZ) and the Ornithological Society of the Middle East, the Caucasus and Central Asia (OSME).