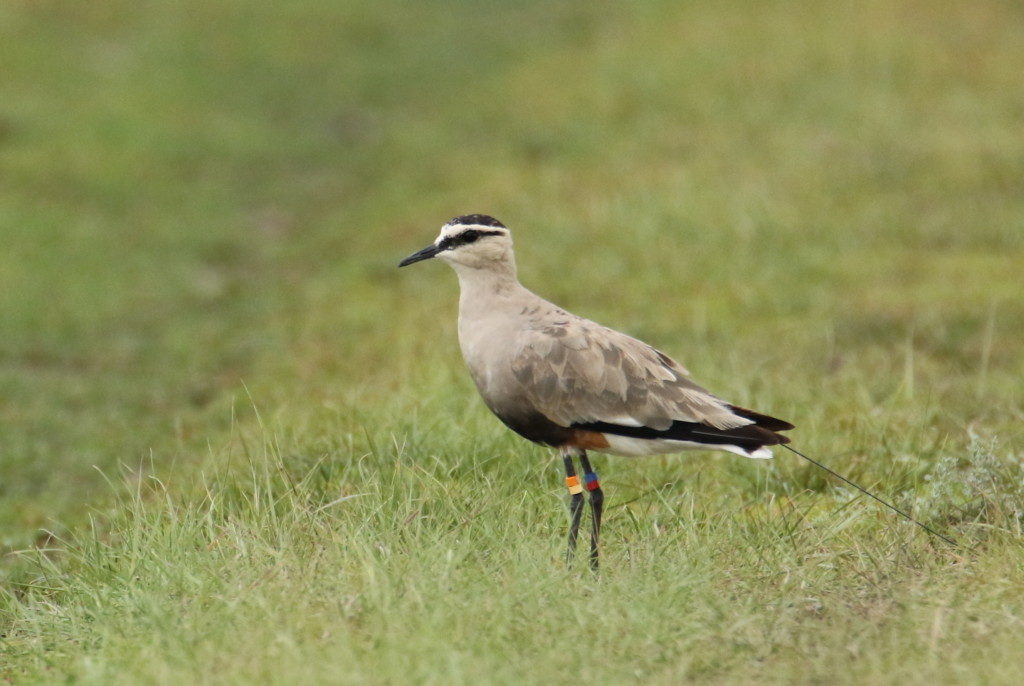 I’ve been hugely fortunate to have worked on the Critically Endangered Sociable Lapwing for the last 15 years, not just because it is a fabulous study species that has taken me to some wonderful places, but also because I’ve had the privilege of working with many great colleagues (indeed friends). A significant component of that work has been trying to understand more about the migration routes and important stop-over sites, using a combination of satellite tracking, the use of historical records and field surveys. Our research paper (Donald, P.F., Kamp, J., Green, R.E., Urazaliyev, R., Koshkin, M. & Sheldon, R.D. Migration strategy and site fidelity of the globally threatened Sociable Lapwing Vanellus gregarius) has recently been submitted to a scientific journal and us currently awaiting peer review, however a preprint version is now available and can be viewed in full here (note the hyperlink can be a bit temperamental!). I’ll blog about the results in more detail once the paper has been accepted for publication, but in the meantime the abstract is below

This work would not have been possible without the collaboration of literally 100s of people who provided records and took part in numerous surveys. Over the years the various strands of the Sociable Lapwing research, monitoring and conservation efforts have received funding from a wide-range of sources including the RSPB, the UK Government’s Darwin Initiative (here and here), Swarovski Optik (the BirdLife Species Champion for Sociable Lapwing) through the BirdLife Preventing Extinctions Programme, the African-Eurasian Waterbird Agreement (AEWA) and the German Ornithological Society (DO-G), the Mohammed bin Zayed Species Conservation Fund (MBZ) and the Ornithological Society of the Middle East, the Caucasus and Central Asia (OSME).

Population declines of the critically endangered Sociable Lapwing are probably due to high mortality along its migration routes or on its wintering grounds, both of which are very poorly known. We therefore undertook a long-term study of the species’ movements using satellite tagging, colour-ringing and targeted field surveys. We also compiled a database of historical and recent sightings of the species from published and unpublished sources. There were two migration flyways from the breeding grounds in Kazakhstan, along which birds used different staging strategies. A longer western route (c. 5200 km) takes birds west to southern Russia, then south through the Caucasus and the Levant to wintering areas in Saudi Arabia and eastern Sudan. A shorter eastern route (c. 2800 km) takes birds south to Turkmenistan and Uzbekistan, then over the mountains of northern Afghanistan to wintering areas in Pakistan and north-western India. In spring, birds of the western flyway cut out the Caucasus by making a direct crossing of the Caspian Sea from Azerbaijan. The migration strategy is characterised by infrequent long-distance movements followed by often lengthy stopovers in a small number of staging areas that are used consistently across years, and by high individual and low between-individual consistency in patterns of movement, both spatially and temporally. At least four main autumn stopover areas and one additional spring stopover area were identified along the longer western route, but only one autumn and one spring staging area along the eastern route. There was no relationship between latitude or longitude of capture for tagging or colour ringing and the subsequent migration route used, and the same breeding colonies could contain breeding adults and produce chicks of both flyway populations, suggesting that no clear migratory divide exists within the breeding range. Sociable Lapwings spend around a third of the year on their breeding grounds, a third on their wintering grounds and a third moving between them. Birds were highly faithful to their passage and wintering sites, but showed low fidelity to breeding sites. The migration stopover areas and the wintering sites are usually located at the interface of agriculture, particularly irrigated cropland along rivers, and dry steppe-like or desert habitats. This species selects, and perhaps relies upon, agricultural habitats throughout its entire life cycle, and its heavy reliance on some of the world’s most anciently cultivated regions suggests that this synanthropic relationship may have evolved over many millennia. The recent emergence of irrigated cropfields in Arabia is likely to have allowed birds using the western route to winter well north of their previous wintering range and maybe to spread into new wintering areas along the coasts of the Arabian Gulf. The concentration of large numbers of birds at a small number of traditional but unprotected migration stopover areas offers the opportunity to quantify and monitor the global population size, for which we derive a tentative estimate of c. 24,000 individuals (95% CL: 13,700 – 55,560). However, it also makes the species particularly vulnerable to hunting and small-scale habitat change. Illegal hunting along the western flyway is identified as the most plausible driver of the species’ decline.

Photo credit: (©Ruslan Urazaliyev) the header photo is of a satellite tagged female known as Maysa that undertook several annual migrations between the breeding grounds of Kazakhstan to the wintering area of Pakistan via Tallymerjen on the Turkmenistan/Uzbekistan border.