Ravens have been culled in Scotland as part of an unscientific experiment. They are being killed in England in larger numbers than Natural England appear to be prepared to admit. What about Wales? I couldn’t find any information on the website of Natural Resources Wales (NRW) so I submitted a Freedom of Information Request. I’m very grateful to NRW for taking the time to answer my questions. The questions were largely the same as I asked of Natural England a while back so I can compare the answers if need be.

For now here are some interesting points about the licenced killing of Ravens in Wales. From January 2015 until late July this year (when I submitted my FOI), four licences have been issued by NRW that allows the lethal control of Ravens. One licence I’m going to largely ignore – it was issued in April 2016 for the removal of a nest on health and safety grounds (licence 71381:OTH:WCA:2016). It seems that the territorial Ravens were swooping down on workers on exposed platforms at a chemical plant. Non-lethal methods were tried and they failed. No Ravens were killed just nests removed. This all seems pretty reasonable.

The other three licences are more interesting. Two of these licences were issued for periods in 2016. The first one was for up to 50 Ravens to be killed between 7th April and 30th June for the purpose of preventing serious damage to livestock (licence 7076:OTH:WCA:2016). The livestock in question are presumably lambs/sheep as one of the licence stipulations was that ‘Ravens must only be shot when actively attacking or feeding on live ewes/lambs.’ Once the licence expired the licensee submitted a report that stated that 26 Ravens had been shot between the 8th April and the 10th May. In the report there was a comment that stated that…‘at no time has the number (of Ravens) decreased but have now increased.’ So that seems like a rather ineffective intervention. One might conclude that the issuing of licences to kill Ravens to prevent serious damage to livestock is rather pointless?

The next licence that was issued for 2016 was especially interesting (licence 72446:OTH:WCA:2016). This was issued for the period 27th June to the 31st August, also for the purpose of preventing serious damage to livestock. This licence allowed up to 25 Ravens to be killed but in the conditions section of the licence there is no mention of lambs/ewes/sheep. Fortunately, one of the questions I asked NRW in my FOI was if they could provide me with copies of the assessments that were made to justify the issuing of a licence – again I’m grateful for NRW for providing these. These assessments take the form of a tick sheet with a series of standard questions. For this particular licence the tick sheet is pretty sparse – very few questions had any information included. It is difficult to see how and why the decision to issue a licence was reached with the information I have received so far. In my FOI request I also asked NRW if any reports were submitted by licence holders once they expired. Again I’m grateful for NRW for providing me with these reports. The report for this particular licence makes for very interesting reading. The licence allowed for the cage trapping and shooting of Ravens and 23 were killed. In the report it asks for a description of the site where licenced actions were undertaken – the answer given was ‘pheasant release pen, woodland.’ So Ravens are being killed to protect non-native pheasants. The licence has been issued with what appears to be a minimal amount of information – I find that especially surprising. What evidence that has been assessed appears rather contradictory – I’m going to come back to this licence again once I’ve clarified a few things.

The final licence was issued this year for the period 26th March and 30th April 2018. Licence 79100:OTH:WCA:2018 was issued for the purpose of preventing serious damage to livestock and food stuffs for livestock and up to 5 Ravens can be killed. In contrast to licence 72446, the tick sheet is rather detailed and the rationale for issuing this licence seems well considered. This could be due to the site falling within a Natura 2000 site (the location of which is redacted although I think I can work out where it is). NRW did provide me with a copy of the Habitat Regulations Assessment which assesses any possible impact on relevant features, in this case they specifically mentioned Chough and Manx Shearwater, and concluded (reasonably) that there would be no impact on these species. There are a few things that bother me with this licence and I will seek further clarification. A report has yet to be submitted by the licence holder so it is not clear how many Ravens have been killed. 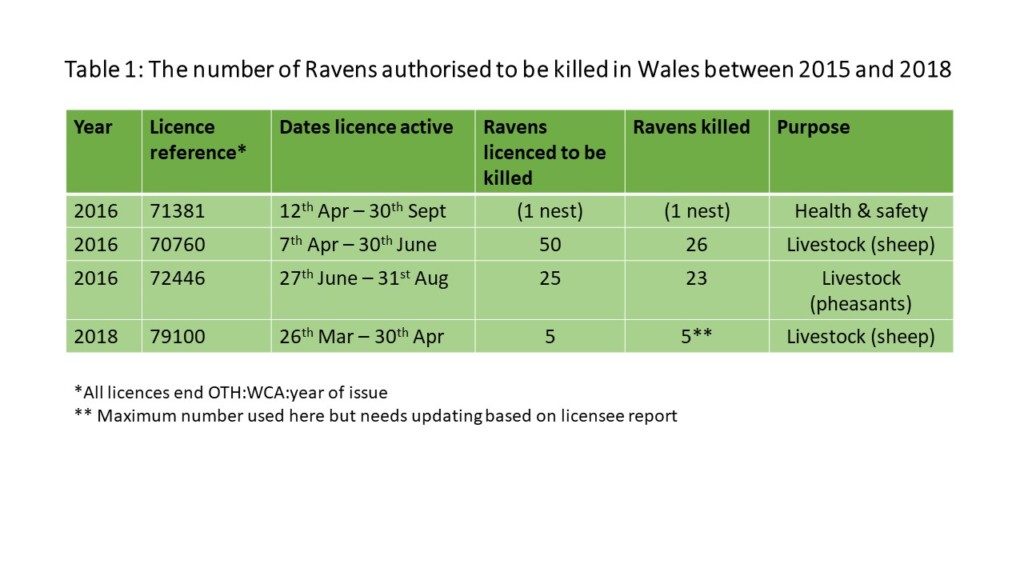 In summary, four licences have been issued since January 2015. At least 49 Ravens have been killed for the benefit of sheep and pheasants, and a single nest has been destroyed. Up to 5 Ravens could have been killed this year although the figures have yet to be returned to NRW. I find it difficult to understand why Ravens are being killed to protect pheasants at release pens and will seek further clarification as to why this is the case. More soon.