What did we just vote for?

What did we just vote for? 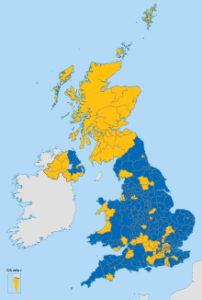 After 12 days in the US I’m heading back to Chicago airport and back to the UK. The UK I’m returning to is clearly going to be a very different place after the historic vote to leave the European Union. Six hours behind the UK, I watched the drama unfold thanks to the BBC, and as early as the Sunderland declaration it was clear that this was going to be an uncomfortable outcome for those wishing to #remain. As I woke up this morning and again watched the press coverage and reaction on social media, the most fascinating question to me – is what did we just vote for? The extra £350 million a week for the NHS seems to being disowned already. Nigel Farage claiming on ITV News that we now have a £100 million ‘featherbed’ that we can spend as we choose. But do we? We are yet to start negotiations with the EU about our future relationship and we don’t know what the financial settlement will be, so how can such claims be made? David Cameron has resigned and we will now end up with a Conservative leadership contest, just what we need when we need a Government to focus on #brexit negotiations. The predictable rumblings of another Scottish Independence vote are stirring already, and an Ireland unity campaign will surely gain traction. And the initial economic reaction doesn’t look great but the outlook will surely remain uncertain as nobody seems to be able to say what happens next. Much of what I hear/read from Brexit politicians and commentators is that we need a period of calm and prepare ourselves for the upcoming negotiations with the EU. So we don’t know who our Prime Minister will be in a few months time, we don’t know who is going to lead the EU negotiations, we don’t seem to know when, or even if, we will invoke Article 50. We have no idea how the rest of the EU will approach the negotiations, and we seem to be creeping closer to a disintegration of the United Kingdom. So much for taking back control! So much for taking our country back!

The environment barely featured in the referendum debate, but the vast majority of the experts (yes, I know we should ignore them) argued that membership of the EU was a good thing. Our wildlife have no concept of political boundaries, turtle doves and cuckoos don’t use passports as they take advantage of freedom of movement! Air and water pollution won’t stop at the channel as the UK exerts its new found independence. The solutions to climate change won’t be implemented by any one nation state. Collaboration to solve global problems can be the only way forward. I fear for the future of wildlife laws and regulations in the UK (or maybe I should say England?). The Conservatives don’t have a great track record on the environment in recent years, and the likely new leaders are arguably even more hostile to nature and wildlife.

I think our conservation NGOs were too quiet during the referendum, but let’s be honest the outcome was never going to be determined by our love of cuckoos, hedgehogs and species-rich grassland. Our wildlife and landscape are intertwined with farming, and our agricultural and environmental policies are now up for grabs. We will need our conservation and environmental NGOs to be stronger than ever. They have recently fought hard to help protect the EU Nature Directives, now we need them to rally their memberships and fight even harder for an effective replacement. We can all help. Join and support a conservation NGO today, they will need all the help they can get.